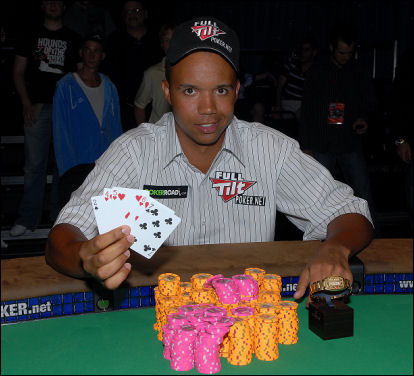 With his recent court case firmly behind him, renowned poker legend Phil Ivey is now making it his mission to bounce back by winning large sums in online poker rooms.

Ivey made a name for himself on the poker scene when he first began playing the game in Atlantic City whilst working for a telemarketing firm in the 90s. Known in poker circles by his pseudonym ‘No Home Jerome’, he soon began to win large sums of money in his formative years, but it was not until the early millennium that he would have his big break.

In 2002, Ivey won three gold bracelets at the World Series of Poker, pocketing more than $100,000. He has since become a permanent fixture at poker tournaments around the world and has acquired much more silverware throughout his career. As a resident in Las Vegas, Ivey as now regularly seen playing at tables within the city, but it was a recent altercation in a London-based casino that landed him in the court rooms.

Back in October, Ivey was seen playing in one of his favourite British casinos, the Crockfords Club in Mayfair. After making a huge £1 million stake, Ivey won a total of £7.7 million, ($12.4 million) and was told his winnings would be wired over to him electronically as he made his way back to the US.

But when Ivey only received his £1 million stake back, it later emerged that the Crockfords Club had refused to pay the winnings because Ivey had made his fortune using a tactic known as ‘edge-sorting.’ While not technically illegal in casinos, akin to card-counting, it is frowned upon, and Crockfords maintained that it was a form of cheating; as such they would not honour the payment.

A drawn-out court case ensued, eventuating in Ivey losing the case. Ivey told press afterwards: “I am obviously disappointed with this judge’s decision. As I said in court, it is not my nature to cheat and I would never do anything to risk my reputation.”

Since the unfortunate outcome, Ivey has been regaining his reputation by playing online in his part-owned Full Tilt Poker. The star has just as much of a following in the online world as he does on the land-based tables. With his winning reputation glamourising the game, online casino sites have seen a huge increase in popularity in recent years, while promotions and offers are only serving to bring in more players.

No player has been more successful then, than Ivey himself – the star managed to acquire $483,000 in just 30 days of play with the poker website that he helped to design.

It may not be $12.4 million, but it’s a small step to healing a painful wound.