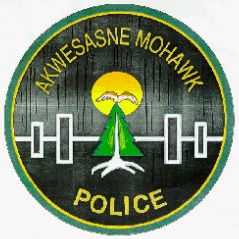 CFN – On Friday March 20th, 2015, Ryan John Lazore was extradited from New York State to Canada. On December 30th, 2014, the Akwesasne Mohawk Police Service had obtained a Canada-wide Warrant of Arrest for Lazore for the “Second-Degree Murder” of his mother, Lori Sue Lazore. Mr. Lazore was being held in New York State pending an Extradition Hearing for his return to Canada.

Chief of Police Jerry Swamp stated “this is an example of the high level of cooperation the Akwesasne Mohawk Police Service has with local and International partners in Law Enforcement. This Extradition moved quickly due to the assistance of the Canadian Department of Justice, the U.S. Attorney’s Office, the U.S. Marshall’s office and the Saint Regis Mohawk Tribal Police Department”.