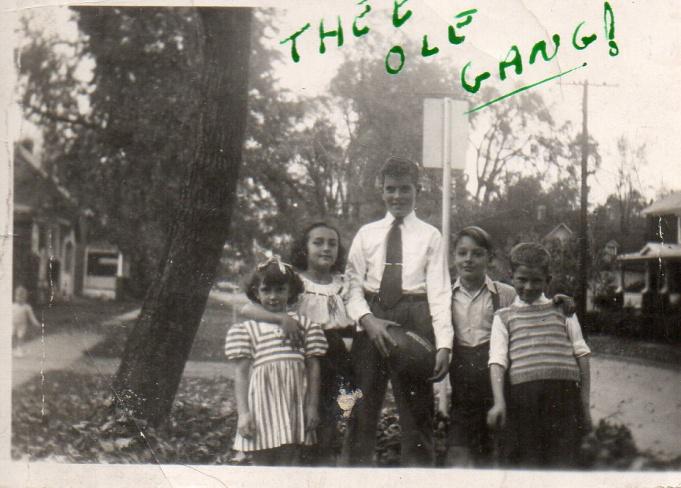 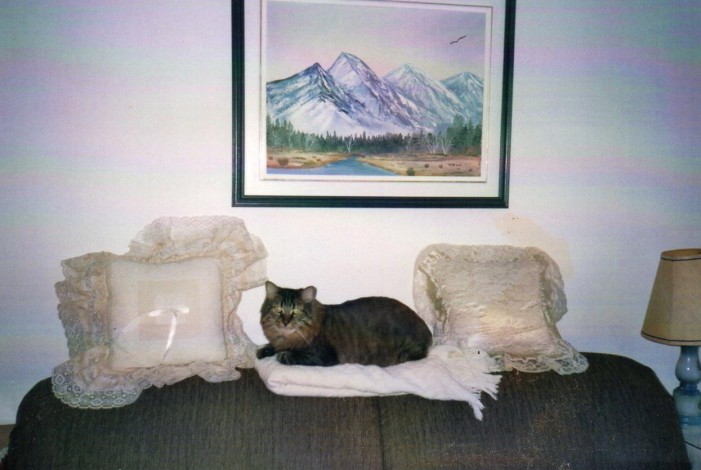 I love to go to the Glen Stor Dun Lodge and eat in that lovely dining room looking out at the river. It occurred to me that from the Blue Anchor restaurant in Glen Walter until the Marina at Long Sault there aren’t any restaurants on the river. We have had a few from time to time at the Civic Complex over the years. It is so relaxing while you are eating to look at the river winter and summer. Good opportunity for some entrepreneur.

This cat tiger, big big baby is also a big big boss..he likes to supervise whatever I am doing .He likes to sit on the toilet seat lid (it is always down..female, you know) watch me clean the bathroom, get stuff out of the cupboard, brush my teeth, comb my hair, or whatever chore I have to do. His eyes follow me everywhere.

He especially likes to supervise his cat litter tray being changed. I must make some familiar noise of some kind because he will come from off the bed or wherever else he is sleeping , even though he was in a deep sleep and stare into the bathroom door to check. Then, as I proceed with the cleaning, he sits in the hall outside the door and watches my every move.

When the changing of the cat litter tray is done, he leaves the hallway supervision. I know he can hardly wait for me to finish because within a few minutes, I hear him in there scratching half of the new litter around, lots ending up on the floor. Then he comes out and comes to me with a big wail to tell me it has been used and go and clean it…now!!..What a nag!!!

Here is a picture of him supervising me dusting the den as he lays lounging idly on one of his 5 or so beds around the place: When we were kids, the policemen walked the beat. My Mom always told us that if we had any problems, to go to a policeman and he would help us. I think it gave us a nice sense of security.

We had to be off the street when that curfew rang at 9pm and we would high-tail it home. I always remember running past all the bushes that were around the Convent on Fourth Street (now Baldwin House) just in case there was a ‘buggyman’ under a bush. Behind Miller’s funeral home in their backyard, there were huge wooden boxes. The older kids told us younger ones that the coffins came in those big wooden crates and Dracula was in one. Maybe even Frankenstein. When we saw those boxes, did we run!! Boy, was that scary.

I remember after I saw the movies about the Walking Dead and the one about Zombies, if I went to play with my friends at York and First Streets, and it was getting near dusk, I would run past the Trinity Church grave yard at Second and York Streets to get home, real quick. We all saw too many scary movies in those days , I think.

The Urban dictionary on the Internet has so many great words. I had never heard the word ‘zeg’ before. It is Georgian and means the day after tomorrow. For an example, today is Thursday, tomorrow Friday and zeg is Saturday. Apparently there is no English equivalent for it. Also with no English equivalent, is the Swedish word’ Lagom’ which means something like, ‘Not too much, and not too little, but juuuuust right.’

Here is an old but goodie photo of the kids I used to play with around First and York Streets : Barbara Airey, myself, Gordon Armstrong, Earl MacPherson and Brian Harrop. We used to make big piles of leaves and then run through them. It was so much fun. The neighbours liked it because we raked all the leaves in one area. Hollister’s store was around the corner on First Street. It had everything a kid needed: bubble gum, ice cream, pop, lots of candy, licorice of course and the best chocolate milk ever. HEAVEN. A 67 year old woman had a heart attack and was taken to hospital. while on the operating table she had a near death experience. Seeing God she asked, “Is my time up?”

Since she had so much more time to live, she figured she might as well make the most of it. Upon recovery, the woman decided to stay in hospital and have a face-lift, liposuction, breasts implants and a tummy tuck. She even had someone come in and change her hair color and brighten her teeth!

After her last operation, she was released from hospital. While crossing the street on her way home, she was killed by an ambulance.

Arriving in front of God, she demanded, “I thought you said I had another 30 years? Why didn’t you pull me from out the path of that ambulance?”