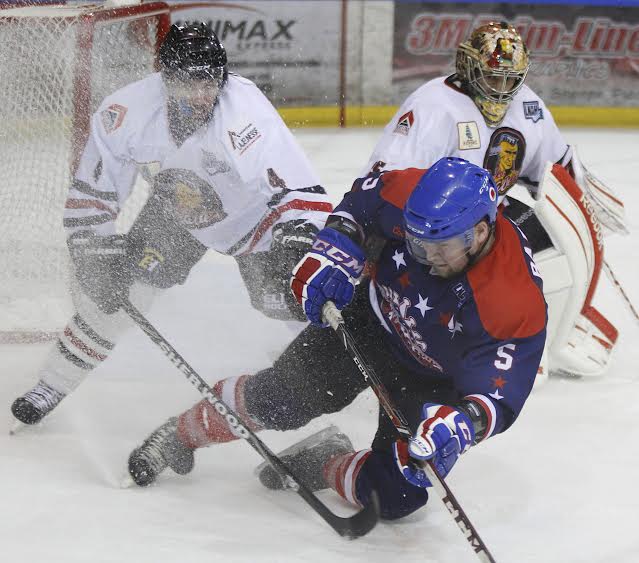 CORNWALL Ontario  – The River Kings have filled two leadership roles from within.

Brennan Barker, the 30-year-old defenceman from Long Sault, has been named the team’s captain.

“Brennan has been with this team since Day 1 and he’s a great leader on and off the ice” said Rick Lalonde, general manager of the River Kings. “He’s a good community guy and well respected in the dressing room.”

Barker replaces Steve Simoes, who retired at the conclusion of the 2014-15 campaign.

“I’m very honoured to be named captain and I know I have big shoes to fill,” said Barker, who was fortunate to have Simoes as his stall mate in the locker room the last three years. “I can use him as a blue print because he did such an amazing job.”

The hard-hitting, stay-at-home defenceman had three points and 90 penalty minutes in 31 games for the River Kings last season. He also chipped in three points in Cornwall’s seven-game series with Sorel.

Barker believes the potential the team showed in its post-season play is just the beginning.

“It’s very exciting going forward with the stability in place to build on what we did last year in the playoffs,” said the captain. “We will have a new swagger and confidence that is only going to help us starting the season.”

Lalonde himself will step behind the bench this season; he will serve as the team’s GM and head coach.

“I’ve been around this league a few years now and I’m ready for the challenge,” said Lalonde. “I understand the differences between junior and senior Quebec hockey and I’m looking forward to moving this program in the right direction.”

Lalonde resigned from his head coaching duties with St. Jerome (Jr. AAA) and will focus solely on the River Kings in 2015-16.

Meanwhile, Lalonde has come to terms with two key players.

Antony Courcelles, the team’s leading scorer last season, will return to Cornwall. After a season overseas in France, the 23-year-old rookie from Laval led the Kings in goals (21) and points (34) in 2014-15.

“He’s an exciting player to watch and has found a home in the LNAH,” said Lalonde. “We expect big things from Antony now that he knows the league.”

Cornwall has also agreed to terms with local defenceman Ryan Sullivan. The 6-foot-4, 210 lb. defenceman from Cardinal, ON, appeared in 23 games with the River Kings last season.