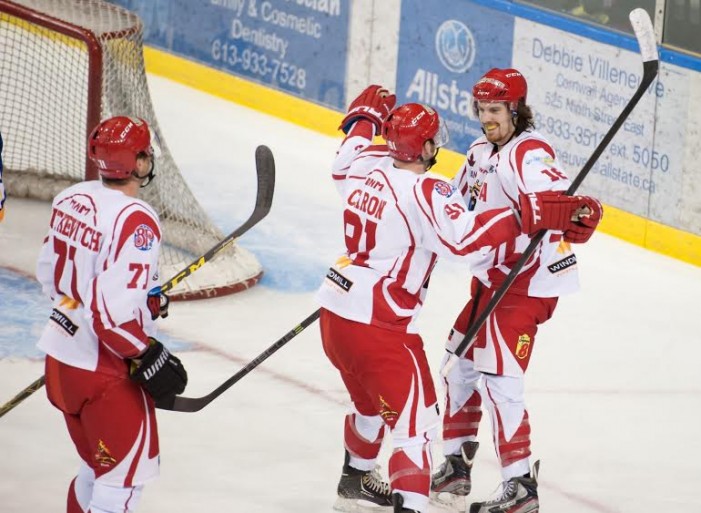 CORNWALL Ontario – Newly acquired forward Nicolas Pard made a great first impression on Saturday night at the Civic Complex, scoring two goals for the River Kings in a 6-2 victory over Laval.

It was Pard’s first game in Cornwall – and he helped deliver the River Kings first victory of the season in front of 1,196 fans. Pard now has three goals in three games for Cornwall (1-9-1).

Pete Karvouniaris was solid in goal for the River Kings with a 43-save performance.

Pard opened the scoring for Cornwall 99 seconds into the contest. Laval responded with an Eric Laplante marker at 3:40 of the opening period.

The River Kings powerplay took over from there, with three straight goals with the man advantage.

Sasha Pokulok went top shelf on Karel St-Laurent to give Cornwall a 2-1 lead at 7:36 of the first before Antony Courcelles batted in a Pokulok rebound at 10:10.

Then, Pard chased St-Laurent from the contest with his second of the night at 11:47.

Nicolas Larocque-Marcoux, off a faceoff, redirected a shot past Adam Russo to give the River Kings a 5-1 lead at 13:28 of the middle frame.

Olivier Daunais gave the Predateurs some life early in the third when he beat Karvouniaris 2:49 into the period. Julien Houle, with his first of the season, put away Courcelles’ rebound with 8:13 to play, to restore Cornwall’s four-goal lead. Later in the third, Houle was forced to drop the gloves with Laplante, who received an extra two minutes.

There were some early fireworks in the contest with Curtis Tidball of the River Kings taking on Laval’s Sebastien Laferriere and Cornwall’s Brennan Barker going toe-to-toe with Steven Oligny of the Predateurs.

Barker left the game later in the first period with a lower body injury after blocking a shot.

FRIDAY NIGHT: On Friday at Sorel, the River Kings were soundly defeated 7-2 by the Eperviers. Samuel Carrier had a goal and four assists for Sorel in a contest that featured a brouhaha in warmup. Francois Ouimet and Courcelles, with his first of the season, were the goal scorers for Cornwall.

NEXT WEEKEND: The River Kings are back in action next Friday night in Laval (8 p.m.). Cornwall’s next home game is Sunday, Nov. 22 vs. the Thetford Assurancia. The puck drops at 3 p.m.