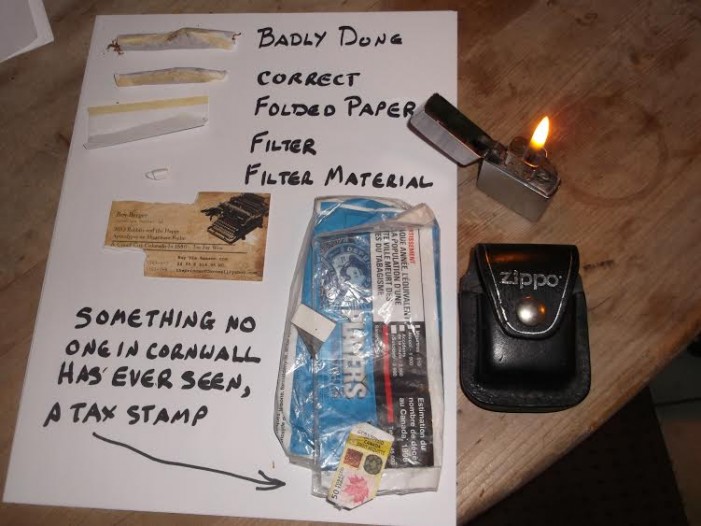 If cigarettes weren’t sexy and cool, people wouldn’t use them. Men smoke, boys don’t but you too, have come a long way, Baby.

Because the uninformed children of Cornwall and Canada in general, aren’t taught how to properly roll cigarettes by their parents and educators they fuel the illegal tobacco trade’s production of factory made cigarettes, using the St. Lawrence Valley as a damp, underground Checkpoint Charlie.

The iconic image of the grandfatherly old man rolling cigarettes on a public bench while watching kids play on the swings has been sadly interrupted on a variety of legal and wholesome nanny fronts. How is a generation to learn and bond if information can’t be handed down? No wonder kids are frustrated by their finger fumbling naive efforts

We need to be satisfied with the fruits of the garden in front of us. The money that goes towards smoking tobacco is phenomenal. The effort to avoid paying duty and taxes on the product is part of what contributes to the contraband’s importing and distribution.

Healthy, patriotic, legal smoking means rolling your own cigarettes and avoiding illegal cigarettes. Today’s teens need to learn. There’s nothing like a good smoke between classes, during recess or after school. Today’s teens need to be taught thrift in order for them to continue upgrading their stamp collections, shortwave radios or investing in an R.E.S.P for their preferred bible college.

Are we thinking things through? Where is our social conscience? Where is the merit badge for rolling smokes eh, Mr. Baden Powell?

The shaming of the hand crafted built cigarette must become a poor memory. The tailor made cigarette as a daily habit, easily costs ten times more than rolling – that’s thousands of dollars a year. The monetary difference between buying a pack of pouch tobacco as opposed to a pack of factory smokes, over five years, is enough for a significant down payment against a house in Cornwall or a mansion in Windsor. This is easy new math simply taught at secondary school level if not earlier. The savings are sufficient capital for any venture. Have you all become Marxists? Are you against capital? Is it the Soviet of Stormont, Dundas and Glengarry now? Rolling cigarettes by hand allows for a modest dollar a day habit, fully paid taxes to the purse of the Crown and as you know, adds to the pleasure of any civilized public train or bus ride.

I don’t refer to the maniacal indulgence of cranking out paper tubes on the kitchen table while sausage stuffing it from a bale of tobacco. I’m talking about the comfort of gently laying down a pinch of sweet tobacco in thin folded paper, gently curled over with the finger tips and silently licked by the tongue to make a smoke. Now, an earned smoke, something worth having, while waiting for the bus, is far more pleasurable than any common trollop trigger smoke pulled from a pack. Should the transport arrive early, as it may, then such a sacrificed tossed “rollie” is worth nary a nickel. Naturally this smoker tends to smoke less due to the strength of the tobacco and the effort to create.

The proud smoker respects global warming by rolling their own cardboard filters. Buddy can tear up a biodegradable business card, roll up an edge and wiggle it into the end of the cigarette as a stopper for the sweet spitting shreds of tobacco. I cannot extol the virtues of electronic vaping as it increases the demands for nuclear energy as a source which is so totally anti-hip.  I can however hold up the, butane free, Zippo lighter.

It is facetious to discuss the illegality of smoking in a car containing children while the same vehicle is driving down a fume filled highway current flowing with the debris of diesel, detritus exhaust fumes and enough rubber tire dust to create an island.

Santa set his example by smoking a pipe but the next time you read about a police chase ending with a Ford F-150 pick-up truck, side swiping a utility pole, spilling baggies of cigarettes all over the avenue while the suspects run faster, leap higher and hide longer in a nearby cousin’s/aunt’s house, wouldn’t it be comforting to know that your child is innocent of contributing to such folly by the virtue of rolling their own? Free the children.

Roy Berger is a contributor to Fogel’s 2015 Underground Comic Book Guide.http://www.hippycomix.com/ and author of 2012 Rabbits http://www.amazon.ca/Rabbits-Happy-Apocalypse-Shortwave-Radio-ebook/dp/B005CBFR9G

Illegal Cigarettes & the Lost Art of Rolling In Cornwall Ontario by Roy Berger NOV 16, 2015 added by admin on November 16, 2015
View all posts by admin →

12 Responses to "Illegal Cigarettes & the Lost Art of Rolling In Cornwall Ontario by Roy Berger NOV 16, 2015"