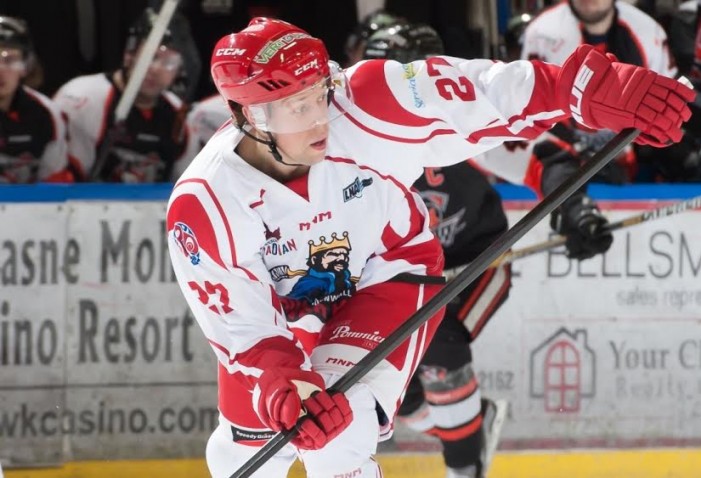 CORNWALL Ontario – The defending champion Thetford Assurancia completed a weekend sweep of the River Kings with a 7-2 victory at the Civic Complex on Saturday night in front of 847 fans.

After the game, owner Steve Moreau announced there will be a coaching change in the immediate future.

“It’s time for a change, that much is clear,” said Moreau, who has mutually agreed with head coach Rick Lalonde that the team will hire a new bench boss right away.

“We are already negotiating with suitable replacements,” said Moreau.

Lalonde, also the team’s general manager, was ejected from the game in the third period when he received a gross misconduct. On this night, the outcome was never in doubt.

Cornwall leveled the score at 5:25 of the opening frame on a shorthanded effort by Francois Ouimet, who beat Jean-Philippe Levasseur with a back hander.

Thetford regained the lead for good with 3:15 to play in the first when Stephane Boileau finished off a 2-on-1 with a tap-in goal.

Alexandre Tremblay scored a powerplay marker for the Assurancia at 7:09 of the second before Sebastien Courcelles gave Thetford a 4-1 lead at 9:19.

Alexandre Touchette pounced on a loose puck and scored his first as a River King at 10:29 of the middle frame. Twenty four seconds later however, Nicolas Corbeil restored the Assurancia’s three-goal lead.

Mathew Medley’s squeaker from the point beat Karvouniaris with 2:27 to play in the second.

Eric Fortier added his 9th of the season at 6:19 of the third to round out the scoring.

Frustration boiled over for the River Kings in the third. After Lalonde was tossed from the contest, Frederick Cote dropped the gloves with Christophe Losier and Curtis Tidball took on Martin Lariviere.

KINGS/CAS EVENT: At Saturday’s game, generous River Kings fans donated toys to make a child’s wish come true as the team teamed up with the Children’s Aids Society of Cornwall for the “2015 Christmas Star Campaign!” Fans who donated a gift received a free ticket to a future Kings game as well as a ballot for a chance to win a basket of prizes.

FRIDAY NIGHT: On Friday night at Thetford, the Assurancia scored six unanswered third-period goals en route to a 10-3 victory over Cornwall. Nicolas Pard, David Croteau and Francois Ouimet had the goals for Cornwall, which trailed 4-3 after 40 minutes. Tremblay had a hat trick for Thetford, while Fortier and Medley had five-point nights.

NEXT WEEKEND: Next Friday, the River Kings travel to Riviere-du-Loup to take on the 3L (8 p.m.). Cornwall is back on home ice on Saturday, Dec. 12 as the Jonquiere Marquis pay a visit to the Civic Complex. The puck drops at 7:30 p.m.

TEDDY TOSS: The River Kings annual Teddy Bear Toss will be held on Saturday, Dec. 19 when Saint-Georges visits Cornwall. Fans are asked to bring a new or gently used Teddy Bear to the game. Bears will be tossed onto the ice after the River Kings first goal.