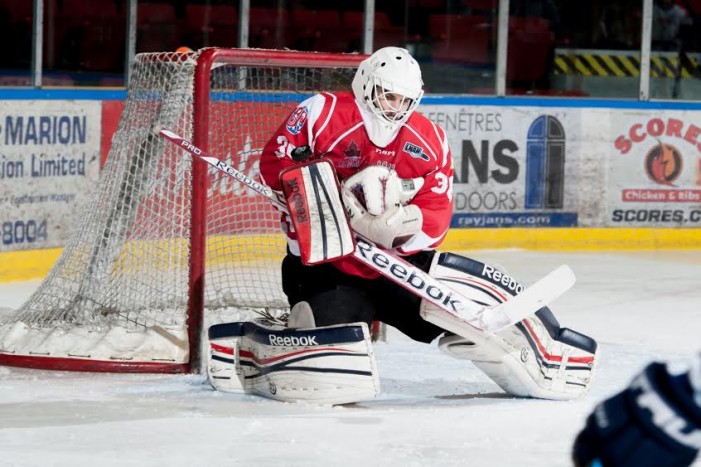 CORNWALL Ontario – The River Kings continued their improved play in the friendly confines of the Civic Complex, shutting out the Laval Predateurs 2-0 on Saturday night in front of 1,155 vocal fans.

Pete Karvouniaris was spectacular in goal for Cornwall with a 35-save performance as the River Kings improved to 4-2-2 in their last eight LNAH contests on home ice.

David Croteau opened the scoring for the River Kings 2:27 into the second period. The smooth-skating Croteau beat Karel St-Laurent with a perfectly placed wrist shot right under the crossbar. It was the only goal Cornwall would need on this night.

Francois Ouimet iced the victory for the River Kings with an empty-netter at 19:46 of the third.

There were two entertaining tilts in the scoreless first period. First, Cornwall’s Curtis Tidball went toe-to-toe with Martin Trempe. Then, Francis Lessard renewed acquaintances with Sebastien Laferriere, getting the better of his old foe. Trempe and Tidball would tangle once again in the middle frame.

ATTENDANCE: River Kings owner Steve Moreau was pleased with the spike in attendance. The announced gathering of 1,155 was the second largest crowd of the season at the Civic Complex. “The fans were awesome tonight; we challenge Cornwall to 1,300 for Sunday’s game!” said Moreau. “Bring a group of friends, the team needs you now more than ever.”

SUNDAY MATINEE: Cornwall hosts Trois-Rivieres on Sunday afternoon at the Civic Complex. The puck drops at 3 p.m. After the game, fans are invited to come out onto the ice and skate with the River Kings. There will be photo and autograph opportunities as well.