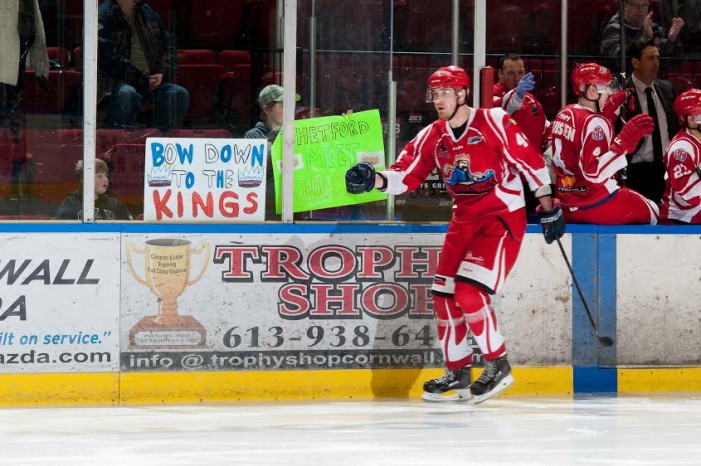 The red-hot River Kings faced a huge test on Friday night at the Civic Complex and passed with flying colours, defeating the defending LNAH champion Thetford Assurancia 4-2 in front of 1,132 vocal fans.

With the come-from-behind victory, Cornwall is now 5-0-1 in its last six games. Defenceman CJ Chartrain’s blast from the blue line with 9:40 to play in the third was the game-winner.

Sy Nutkevitch opened the scoring for the River Kings at 3:28 of the first with his 7th goal of the season. Nutkevitch sprung loose on a semi-breakaway and fired a perfectly-placed wrist shot past Thetford’s Jean Philippe Levasseur.

The Assurancia replied with a Felix Lefrancois marker at 15:47 of the opening frame. A shot from the point banked off Lefrancois’ leg and past a helpless Charles Corsi.

Lefrancois’ second of the night, off a perfect feed by Martin Lariviere, with 6:46 to play in the second gave Thetford the lead heading into the dressing room after 40 minutes of play.

Keven Veilleux scored a highlight reel goal just 45 seconds into the third to level the score for Cornwall. Veilleux took a pass from Stephen Blunden, then undressed Levasseur with a beautiful backhand deke.

Then, Chartrain’s absolute blast from the point beat Levasseur cleanly above his blocker. The goal, mid-way through the third, came on the River Kings 16th shot of the period. Veilleux, with his second of the contest, then iced it for Cornwall with 57 seconds to play.

The River Kings outshot the Assurancia 23-9 in the third and 48-31 overall. Veilleux (first), Chartrain (second) and Levasseur were the announced stars.

FRIDAY NIGHT FIGHTS: Cornwall’s Maxime Vachon took it to Simon Courcelles in a spirited first-period scrap. A wobbly Courcelles was helped off after apparently hitting his head on the ice. River Kings enforcer Curtis Tidball took on Ryan Hand mid-way through the second period. Moments later, Cornwall’s Alexandre Gauthier thrilled the crowd with an entertaining tilt with Tommy Bolduc.

NEXT WEEKEND: With only seven regular-season contests remaining on the schedule, Cornwall travels to Trois-Rivieres next Friday to take on the Blizzard. The River Kings are back on home ice Sunday, Feb. 14 when the Laval Predateurs visit the Civic Complex. The puck drops at 3 p.m.