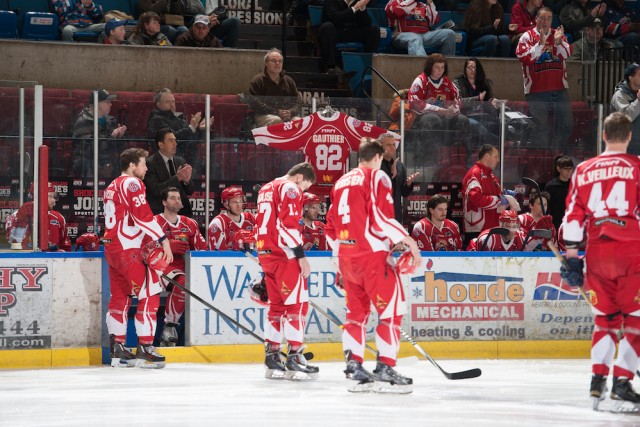 The Jonquiere Marquis skated to a 5-1 victory over the River Kings on Saturday night at the Civic Complex to clinch first place in the LNAH and a first-round playoff date with Cornwall.

The River Kings wrapped up the regular season in front of an announced crowd of 883.

The best-of-seven series will begin Friday, March 11 in Jonquiere. The River Kings will host the Marquis in Game 2 at the Civic Complex on Saturday, March 12. The schedule for the rest of the series will be announced on Monday.

Prior to Saturday’s game, Cornwall fans gave a standing ovation when public address announcer Thom Racine reported that River Kings forward Alexandre Gauthier has come out of a coma and regained consciousness. He was seriously injured in a head-on collision on Feb. 26. The River Kings had Gauthier’s No. 82 hung on the bench during the game.

Jeremy Vigneault-Belanger opened the scoring for Jonquiere at 3:46 of the first when his wrist shot from the faceoff circle trickled past Charles Corsi.

The River Kings leveled the score on a powerplay goal of their own at 14:37 of the first. Nicolas Larocque-Marcoux pounced on a Sy Nutkevitch rebound to beat former Kings goaltender Loic Lacassse.

Jonquiere reclaimed the lead with 1:36 to play in the opening frame when Jean-Sebasiten Berube beat Corsi with a backhander.

Benoit Gratton tapped in a powerplay goal at 11:59 of the second before Jeremie Malouin chased Corsi at 13:36 of the middle frame to give Jonquiere a 4-1 lead. Charles Lavigne took over in the Cornwall crease.

Vigneault-Belanger netted his second of the contest at 15:20 of the third with Jonquiere enjoying a 5-on-3 man advantage. It was the only goal allowed by Lavigne on 19 shots.

Lacasse stopped Eric Satim on a penalty shot with 2:24 to play in the second.

Cornwall defencemen William Lacasse (lower body) and Yan Dumontier (upper body) left the game with injuries and did not return.

Jonquiere outshot Cornwall 47-32 overall, including 24-10 in the second. Vigneault-Belanger (first), Francois Fortier, with two assists, (second) and Gratton were the announced stars.

FRIDAY: At Sorel on Friday, the River Kings took a thumping, a 6-0 defeat at the hands of the Eperviers. Dominic Leveille led the way for Sorel with a hat trick, while Vincent Couture had two goals and an assist for the Eperviers. Pete Karvouniaris took the loss in goal for Cornwall, which was outshot 35-28.