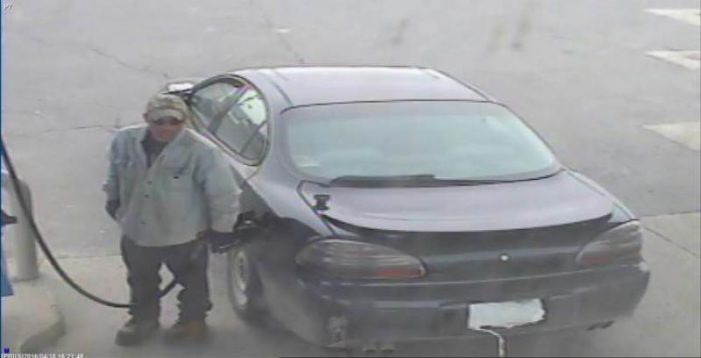 (North Stormont) – On April 18, 2016 at approximately 4:26pm, Stormont, Dundas & Glengarry (SD&G) Ontario Provincial Police (OPP) officers responded to a report of a theft of gas incident at a Service Station on Highway 138, North Stormont Township (Monkland Esso). Investigation indicated that a patron had fueled his vehicle and left the area without paying. Further details revealed the same person/vehicle had committed the same act on April 9, 2016. In both occurrences, the vehicle was observed heading east on County Road 43.

The vehicle is described as a 1997-2003 4-door Pontiac Grand Prix (GT or GTP model), forest green with a rear spoiler and sun roof. The plates were covered with plastic bags. The adult male driver is described as 5’10”, medium build, scruffy facial hair wearing a camouflage ball cap with aviator sunglasses with red tint lenses.

With the trouble this guy went to hide his identity and his license plates I really hope he gets caught and charged with all they can think of. Hat, sunglasses and white plastic bags over his car plates. Arghhhh!!!

Hugger today I read that in Holland and some other European country that in 2025 they are no longer going to have cars that use gas nor diesel. Eventually cars will be run by other means. The LRT here in Ottawa is going to replace a lot of the taxi business as well as getting cars off the road. The pollution is unbelievable.

Jules…the LRT (Jimbo Watson’s legacy project) will not replace taxis or Uber. The LRT is fine for everyday travels. But when you’re going to a meeting who is going to plan their work schedule around the LRT? No one. It’ll replace some bus services, but it’ll never come close to offering the speed and convenience of taxis or Uber.

Hugger my husband spoke to one of the Blue Line Taxi Drivers just this past week and he said that once the LRT comes in it will hinder most of their business. Taxis are essential for getting someone to a conference and such things but the government of Canada and the world in general want cars outlawed as much as possible because of the environment. Yes it is also Jimbos pet project as well.

Jules…do you really think the LRT will “hinder” the taxi industry in Ottawa? Nope, won’t happen. Can you see business and gov’t execs hopping on the LRT to go to meetings and conferences. It won’t happen. And this is not Jimbo Watson’s “pet” project, this is his legacy project. He’s wanted a legacy for years and the LRT will be it, especially when it overruns its budget, etc.