As the shocking and tragic details filter out regarding the death of Abdirahman Abdi at the hands of Ottawa Police officers many Canadians are having a difficult time accepting that this could happen in Canada, never mind our Nation’s capitol.

Ottawa has seen a rash of gun and violent crime over the last several years straining officers who have to deal with situations that are not the norm for the Great White North.

However police officers have to be held to a greater degree of accountability than civilians as society gives them the right to hold and use arms when appropriate.  Any abuse of that has to be dealt with or the public will fear and lose faith in our police services.

The family of Abdi, having escaped the terror of Somalia, surely never expected him to fall in such a violent manner at the hands of Canadian police officers. 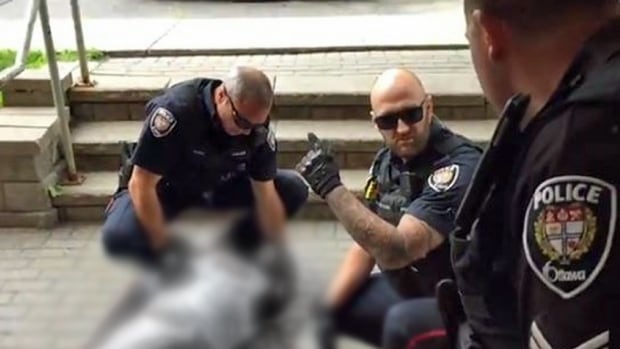 Cst. Daniel Montsion and Cst. Dave Weir have to be held to the extreme.   Listening to the utter suffering of the family watching Mr. Abdi die in front of them while the officers appear to do nothing to assist him to this writer is cruelty.

In particular the body language and facial expression of Cst Montsion is utterly gruesome and frightening.

While speculation was that Abdi was already deceased when he arrived in Hospital he clearly was not conscious in any of the video footage seen.

In addition to being armed, police officers are trained in how to deal with physical situations and how to neutralize and minimize or maximize damage.

Ross McGhie mentions an officer joining into the fray issuing heavy blows.   That officer has yet to be identified.

In this video you can see paramedics practicing CPR to try and regain a pulse which would support Mr. Abdi having died at the scene.    It’s alleged that it took approximately fifteen minutes for them to arrive which is an awfully long time for a city like Ottawa.

The family stated that doctors said that it took forty five minutes for Mr. Abdi to make it to them for care.   That also seems utterly unacceptable.

What do you think dear CFN viewers?  Do you think Mr. Abdi’s life could have been saved if treatment had been delivered in a more timely fashion?    Do you think the officers should be held accountable if proven to  have used excessive force that led to Mr. Abdi’s death and what penalty should they receive if found to be guilty by the SIU?

Do you think that there was any racism involved in this incident?

Pictures and video : You Tube

Accountability Critical in Abdi Death by Police in Ottawa by Jamie Gilcig JULY 26, 2016 added by admin on July 26, 2016
View all posts by admin →

30 Responses to "Accountability Critical in Abdi Death by Police in Ottawa by Jamie Gilcig JULY 26, 2016"