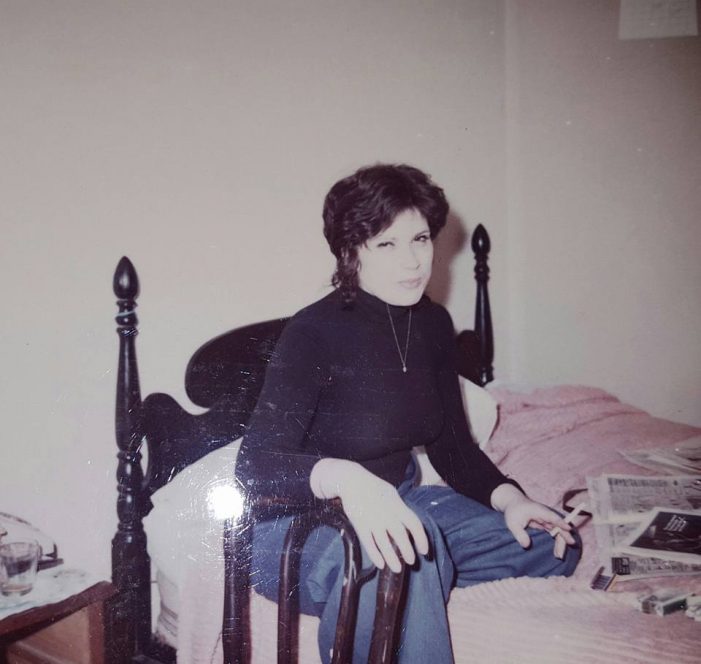 I was doing my laps around the track this morning.   The sun still wasn’t up and my phone was busy working as a pedometer when it vibrated.

She let me know that her mother, my aunt Marcia, who was like a mother to me, had passed in her sleep during the night.   It had been Tasha’s birthday.

Death has always had the poorest of taste.

My first real memory of Marcia was when I was getting my tonsils out as a child.   This wildly dressed 60’s chick was in my room in Laval outside of Montreal.   She had a zebra print on, blue eyes, full red lips and huge ear rings.  It was after all 1968 and she had come back to town after years in the Big Apple, and other parts during the most interesting of times.

She’d learned to take care of herself from an early age (she was the youngest with two much older brothers) and was never a shy petal.   She worked hard no matter what and achieved so much when so many others facing her challenges perished or simply failed.

When she became pregnant with Tasha she was living in NYC.    There was some fear that she might either lose the baby or have it taken away from her.   My grand mother headed down, and like the powerful woman she was made sure all would be right.    Marcia never forgot that and the experience healed many old wounds.  It also instilled in Marcia what a mother does for their children no matter what.

Tasha was Marcia’s life achievement.   There was no sacrifice she wouldn’t make for her daughter.   I was there for part of it living with them a few times when I was younger.

Marcia ended up working for legendary fashion designer Bob Mackie.    She ran the numbers later for the Don the Beachcomber chain.   When I was young I went to stay with her,  and was allowed to work with her all female team as an office boy.  It was a learning experience.

I had my first alcoholic drink (tequila sunrise)  with Marcia and her former husband Jack.   There was no depravity as a young man that I could get into that I couldn’t talk about with her.   She’d seen and lived it all.    She could be brash, but she could also be sensitive.   She could call them as she saw them, but sometimes knew not to.

In the 70’s when my family owned Ma Coakley’s Kitchen in Plattsburgh New York,  across from those skid row bars that had the coolest and most interesting people in them, she ended up running the joint for my dad.

She and her ex husband Jack even brought Sam & Dave to play a gig at the Civic Complex.

It was never boring. She was a force.    At the age of 40 she left her husband and learned how to drive eventually getting her red Jaguar later in life.    Whether it be Toronto, Ann Arbor, or Long Island, where ever she was, she ended up succeeding in her work and being den mother to so many, and depended on.

She loved her step kids, keeping in touch with them long after her divorce.

Sadly the Kools, and other health issues caught up with my favorite aunt, and she passed in her sleep at the age of 69.

Her daughter had moved her to the Austin area to be closer to her family.   Like her mother, she knows how important family is.

Marcia will be missed by many.  I started calling her as a kid and the reality that her number will never be answered is something that still doesn’t feel real.

Mostly though she’s left a life of loving memories to so many.

Death Brings Us Together by Jamie Gilcig RIP MARCIA PHILPOT SEPT 5, 2016 added by admin on September 5, 2016
View all posts by admin →

8 Responses to "Death Brings Us Together by Jamie Gilcig RIP MARCIA PHILPOT SEPT 5, 2016"