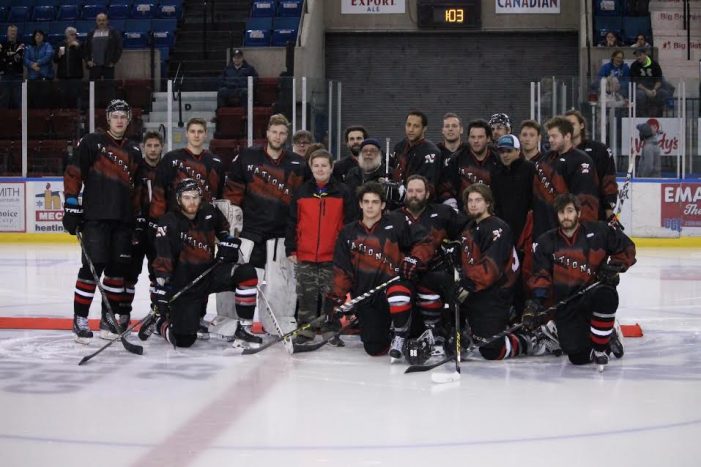 Nationals come from behind to win in OT

CORNWALL ONTARIO  – The Nationals three-game losing streak came to an end on Sunday afternoon with a thrilling 5-4 victory in overtime over the Port Huron Prowlers.

Yan Dumontier’s blast from the point with 53.5 seconds left in overtime gave Cornwall a victory in front of 517 fans. The goal came with the Nationals enjoying a powerplay, after Port Huron was caught with too many men on the ice.

The Prowlers came out strong in the opening period with early goals by Scott Witmyer (2:15) and Chad Bennett (7:44).

But, Maxime Guyon finally buried a rebound past Josselin St. Pierre at 12:28 of the first for the Teddy Bear Toss goal as fans littered the ice with stuffed animals. The teddy’s will be donated to the local Sparky’s Toy Drive.

As local fans settled back into their seats, Joel Trottier’s absolute blast beat St. Pierre less than a minute later at 13:20 to tie the game. But, Port Huron’s John Scully chased Oliver Gervais from the Cornwall crease with an unfortunate bounce at 14:59 of the first.

Ahmed Mahfouz scored a highlight reel goal with a great second effort and a nifty deke on Nicolas Delongchamps at 3:12 of the second.

Guyon then found a wide-open JC Houde, who made no mistake in beating St. Pierre to bring the Nationals to within a goal with 4:11 to play in the second.

Guyon, a few minutes after taking a nasty slash that went uncalled, then buried a perfect feed from Lou Dickenson to level the score at 4-4 with 7:17 to play in the third period and eventually send the game into overtime.

Prior to the game, the Nationals honoured local fan Alex Tourangeau, who dropped the puck in a ceremonial faceoff.

The Nationals are back in action next Friday in Berlin when they face the River Drivers once again. Cornwall is back on home ice with a pair of contests next weekend. On Saturday, St. Clair Shores comes to town (7:30 p.m.) and on Sunday afternoon, Danbury visits the Civic Complex (1 p.m.).