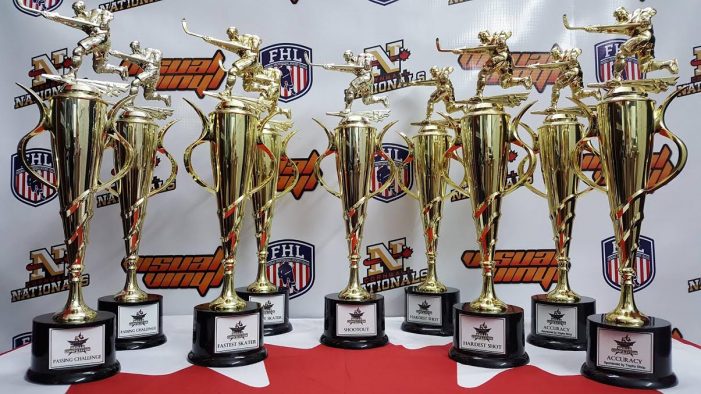 BERLIN, NH – The Cornwall Nationals snapped a three-game skid on Sunday afternoon with a 4-2 victory over the River Drivers in Federal Hockey League action.

Lou Dickenson’s powerplay goal, his second of the contest, with 32 seconds left in the third period iced the victory for Cornwall. Curtis Warren also scored twice for the Nationals.

But the star of the game was unquestionably Francis Dupuis, was outstanding in goal with a 56-save performance. Cornwall was outshot 58-29.

SATURDAY: Danila Alistratov made 49 saves to backstop the Watertown Wolves to a 3-0 victory over the Nationals on Saturday night at the Civic Complex in front of 416 fans. Colin Macintosh scored twice for the Wolves, while former Nationals forward Jason Dolgy added a single. The speedy MJ Graham had a game-high eight shots on goal for the Nationals, who outshot the Wolves 49-42. Dupuis was tagged with the loss in goal despite a 39-save performance.

FRIDAY: Matt Graham had a hat trick to lead the Danbury Titans to a 7-5 victory over the Nationals on Friday night at the Civic Complex in front of 296 fans. Taylor Bourne added two goals and three assists for Danbury. JC Houde, Jay Croop, MJ Graham, Tristan Perreault-Gagnon and Mitchell Porowoski scored for the Nationals. The Titans outshot Cornwall 53-42.

SKILLS COMP: The Nationals will host an inaugural Skills Competition on Tuesday night at the Benson Centre. The event will begin at 6 p.m. on Pad 1. The Nationals will showcase their talents and will be joined by local first responders from the fire, police, and paramedic hockey teams. Once again, the FHL team will raise funds and awareness for a pair of local charities. The Nationals will support Crohn’s and Colitis Canada as well as Cystic Fibrosis Canada. The event will be free to fans of all ages, with a donation to these two worthy charities. Events will include: shooting accuracy, shootout, passing challenge, hardest shot as well as fastest skater.

NEXT WEEKEND: The Nationals have six games remaining this season and three of them will come next weekend on home ice. On Friday, March 24, Cornwall hosts the Berlin River Drivers at the Civic Complex at 7:30 p.m. On Saturday, March 25, the Nationals take on the Danbury Titans on home ice. Puck drops at 7:30 p.m. Finally, Cornwall hosts the last-place St. Clair Shores Fighting Saints on Sunday, March 26 at 6 p.m. Tickets for home games are $13 for adults, $10 for seniors/students and $5 for children under the age of 12.