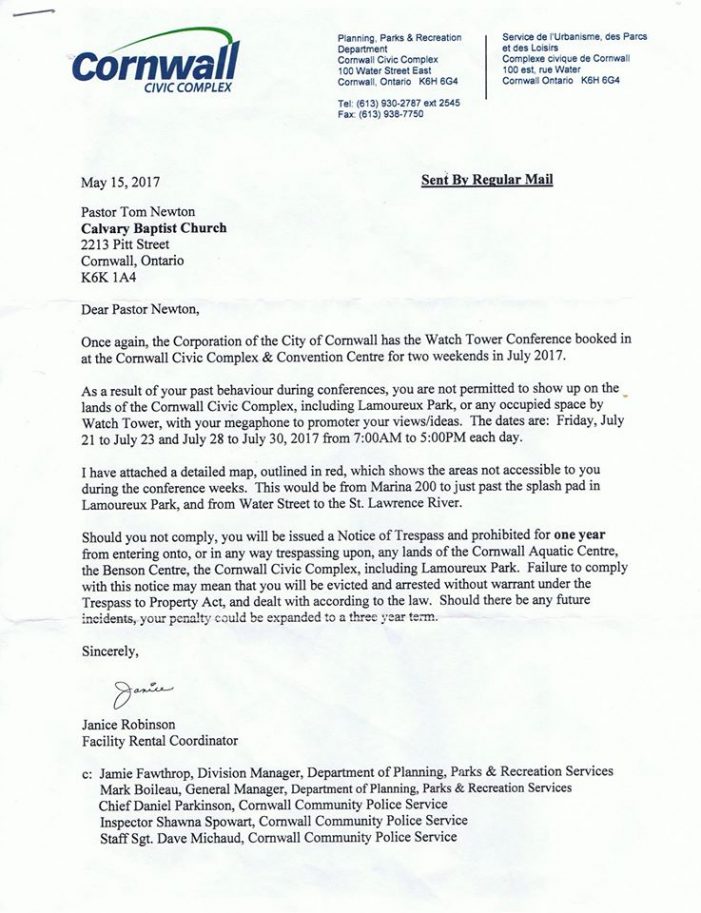 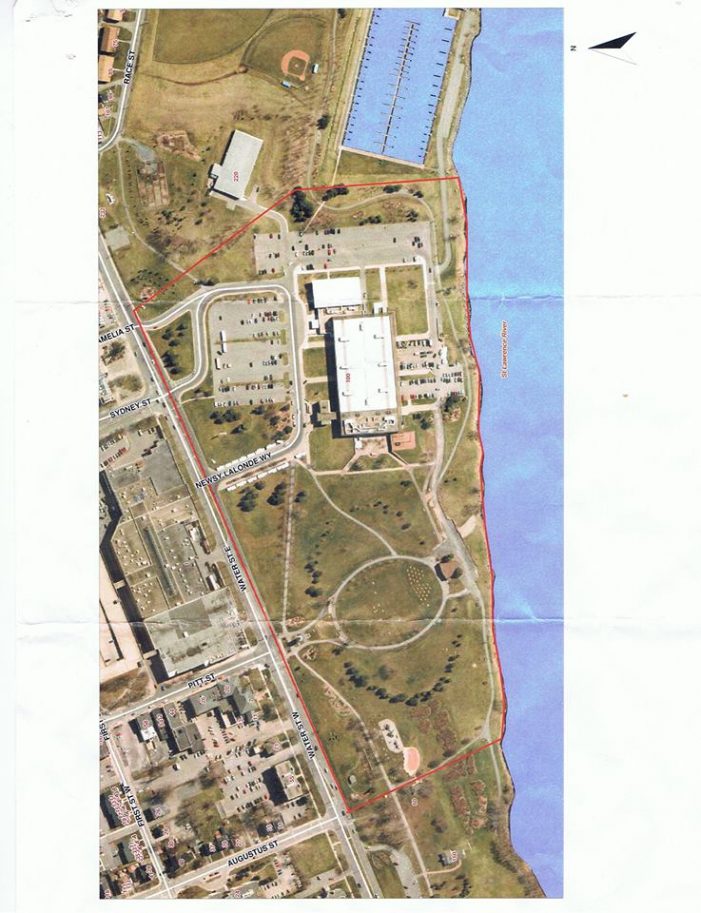 Cornwall Ontario – Whether you agree with his beliefs or not you have to give Pastor Tom Newton of the Calvary Baptist Church in Cornwall an “A” for consistency.

Pastor Tom is rarely without a picket sign and his guitar at events in the Cornwall area.  He has never been violent, and while some may not agree with his message and positions he has never been charged with any hate crimes.

However a recent letter from the City to him regarding the upcoming Jehovah Witness Watchtower Conference at the Civic Complex may have crossed a line or two. The letter, signed by Bob Peter’s ex wife, Janice Robinson, states that the good Pastor essentially cannot walk on the grounds of the city owned public property even though the Jehovah’s rent the inside facilities.    When asked for comment she ducked sending it over to Manager Jamie Fawthrop who said that complaints of harassment from the Jehovah Witnesses and Ribfest led to the letter which is odd as the Jehovah Witnesses themselves have been involved in some freedom of religion litigation over the years. Mr. Fawthrop, speaking to CFN, stated that Pastor Newton was banned because of “harassment”, but couldn’t really define the harassment other than to say that some didn’t like what he was saying.    Pastor Tom stays on the public areas of the park and doesn’t go into the building to spread his message.  Likewise he doesn’t use any electronic devices to amplify his voice, but a simple cone, akin to an old fashioned megaphone.  Looking at the map above, the red lines essentially show that the City is trying to ban the Pastor from simply walking with his sign and preaching his religion on all green areas of the property.

CFN called the Jehovah Witness offices in Toronto and spoke with a media person who identified himself as Jonathan Ursuliak who stated that he wasn’t aware of any complaint from the group and that he’d send in a statement which never arrived.

Police Chief Dan Parkinson, himself a deacon of a church that is heavily funded by the city to provide daycare, refused comment.

Pastor Tom said that he was waiting to hear from the Chief and a few others and that this isn’t his first challenge.

He stated that he’d been arrested before, but charges dropped when he brought in a charter lawyer.

The Jehovah Witnesses have used the Civic Complex due to its inexpensive fees and proximity to Montreal, Ottawa, and the US border.    They even are allowed to park their cars on green grass areas of the park with no parking tickets issued.   Mr. Fawthrop cited that many prefer to picnic in the park (rather than support area restaurants) which led to the complaints of harassment.

Mr. Fawthrop did send a comment for publication which we are adding now.  It should be noted, as above, that what the harassment claim actually is has not been defined nor evidenced.

The Jehovah’s Witnesses have sent in a letter regarding the City’s actions.

Thank you for reaching out to us regarding your concern about the letter issued to Pastor Tom Newton. We cherish our freeness of speech and appreciate the laws that protect our peaceful worship. As indicated by the letter, this is an initiative that was undertaken by the city of Cornwall.

For many years, we have held annual conventions in the city of Cornwall.  As in all other cities, these conventions are open to the public.  In fact, the convention page of our official Website www.jw.org announces the theme, dates and locations well in advance and the local congregations make an effort to reach all in the community with a personal invitation.  This year, the convention of Jehovah’s Witnesses, entitled “Don’t Give Up!” shows how to enjoy a happy life now and gain a real hope for the future. For more information on the convention and how it will benefit those in your community, we invite you to reach out to our local convention media representative, Mr. Wayne Gratton at 613-662-7426.

If you have other questions regarding our beliefs, values and practices, please communicate with our Public Information Desk using the contact information provided below.

Cornwall Bans Baptist Pastor After Jehovah Witness & Ribfest Complaints MAY 30, 2017 added by admin on May 30, 2017
View all posts by admin →