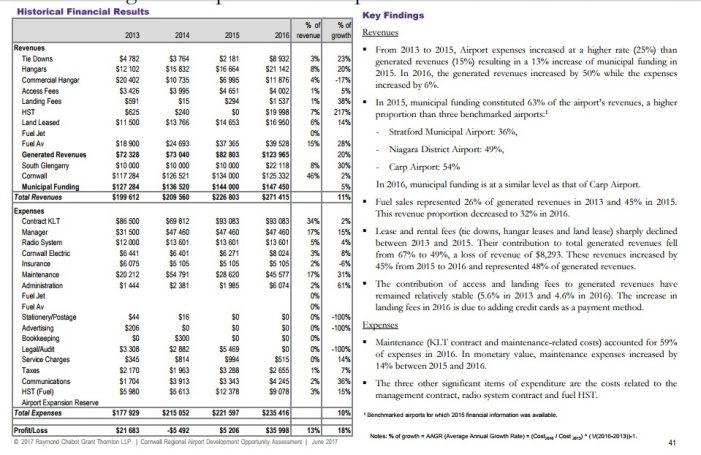 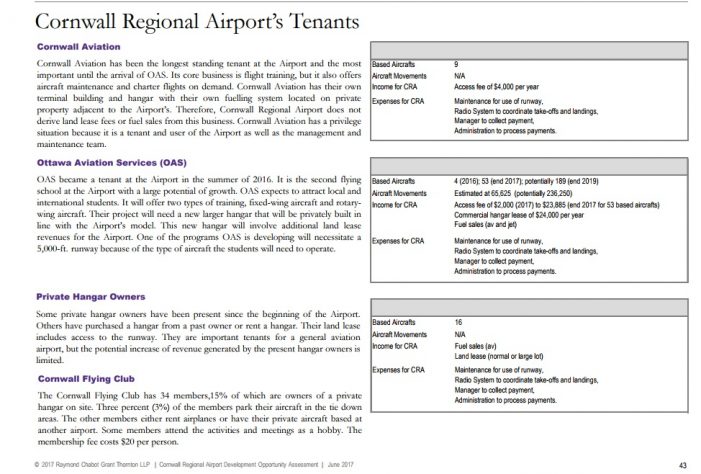 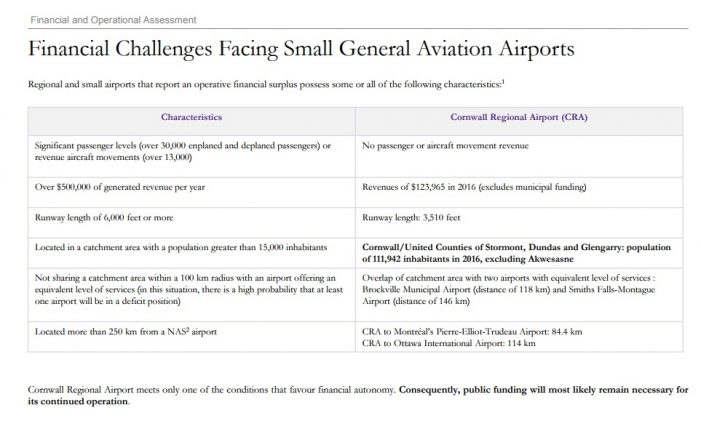 Cornwall Ontario – The City and Township of South Glengarry are about to review a report from a consultant about the Cornwall Regional Airport.

After reading the report this writer is stunned at the money pit that it’s been for taxpayers of Cornwall, and how badly the file has been handled.

Simply put, the current paradigm has zero chance of success.   The runway is too small and the City of Cornwall essentially has been bankrolling a facility in South Glengarry that South Glengarry hasn’t been paying its fair share for.  That’s insane. Almost as insane as the reports recommendation that Economic Development in Cornwall take over.

In a perfect world that might work, but with the utter failure of our ED under Bob Peters and Mark Boileau that’s like having Pennywise the Clown run a city owned daycare.

Frankly this has been a decades old black pit of cash for Cornwall that simply can’t create enough revenue without having at least at 5,000 foot runway.   Adding that is only about $2-3 million dollars which for some strange reason hasn’t been done for said decades.

A big problem is that the facility is in fact not in Cornwall.  Why have we been subsidizing this for South Glengarry?

Does it make sense at this point for the City to invest any further in this facility?   Would it make sense to start a new Municipally owned airport on Cornwall land?

Let’s look at some more info from the report. Essentially nearly 50% of the revenue to float the airport has come from the City of Cornwall.  Essentially local taxpayers are subsidizing an airport for its few clients, nearly none of which are actually from Cornwall.  Is that insane?

South Glengarry, only in 2016 upped its yearly kick of only $10K per year.  Again, insanity. Only $4K for the entire year for Cornwall Aviation?  Holy Mitch Gagne!   Again, how do these sweetheart deals get made? Does Cornwall need an airport?  Not at these costs.   Adding a longer runway would change the paradigm, but to whose benefit?  Clearly the status quo makes no sense for the City of Cornwall.  Closing art galleries, and cutting services and weak infrastructure reserves make so sense when you are subsidizing an airport in another municipality, does it?

And clearly short of South Glengarry coming to the plate we should no longer subsidize this airport as it really serves no purpose for our community.  None. Zip, nada.  You can’t even land a moderate sized jet there.    Isn’t it time for Cornwall ratepayers to stop subsidizing the counties?

It’s Time to Rethink the Cornwall Regional Airport – by Jamie Gilcig 091517 added by admin on September 15, 2017
View all posts by admin →