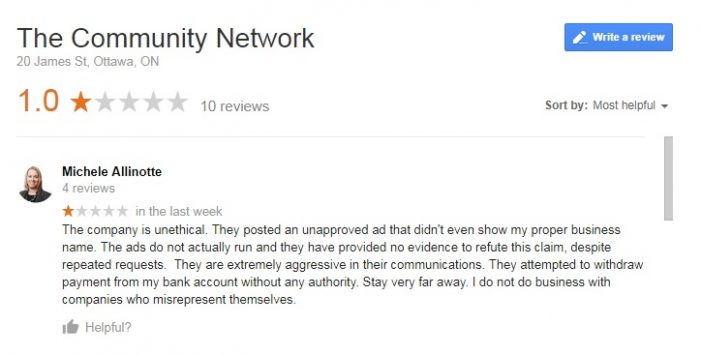 Feeling scammed, ripped off, lied to or ignored by Patient Direct aka the Community Network or MIS TV? You’re not alone.

If you’re a local business owner in Ontario “you” are the target market for Patient Direct. In fact the company may be so clever (after having developed markets like Australia, England and Ireland) that it can predict how media buyers will profitably behave.

Therein lies the company’s biggest opportunity. Some might call it a classic “sitting duck” strategy.

Most Canadians are aware of the more high profile Buyer Beware stories of recent times. There’s the India-based telemarketing duct cleaning scam, the fake Microsoft tech support scam, and many recall the door-to-door furnace-sales scam that put many seniors and low-income households in serious financial peril.

But advertising in hospital and clinic waiting rooms; how does that allegedly work?

Well, in Australia it is reported this way by the Australian Competition and Consumer Commission (Sydney Morning Herald) under the broader headline: Small businesses scammed out of $ 2.2 million

“The ACCC continues to pursue Multimedia International Services, which trades as The Community Network, and sells digital advertising to small businesses which is shown on branded LCD screens at fitness centres, news agencies and shopping centres.

The watchdog has issued Federal Court proceedings claiming the Community Network refused to release small businesses from contracts for advertising services even when it was not providing those services, then pursuing them for non-payment, threatening legal action and, in one case, engaging debt collectors.”

But back to Cornwall and other Ontario communities along the 401 corridor.

After a pitch from one of the company’s professional and well-spoken travelling sales reps – who will present the benefits of digital advertising on a network of screens in hospital and clinic waiting rooms – many business owners will feel so confident they’ll sign on the dotted line immediately, pay a good chunk of the price up front, and fail even to attend a location to look at the screen in context.

And as you can see from the photo of the Cornwall Community Hospital’s Emergency waiting room, the screen is mostly impossible to read and way back behind the triage nurse whose space must lawfully be protected (from people who might wish to stand near) for reasons of patient confidentiality.

And let’s face it,  people sitting in hospital emergency departments are generally in crisis. So if a company is advertising its restaurant, car repair shop, pharmacy or law practice, it should ask itself whether the victim of a car crash, the person having the asthma attack or signs of stroke are actually seeing or thinking about these services.

Wouldn’t it make more sense to advertise in whichever local media has the most suitable demographic and/or readership numbers? Moreover, and in most cases, these media buys will not entail long multi page contracts and if you have an account will invoice you only “after” your ads have proofed by you and then run. After dozens of phone calls to business owners who have purchased a minimum two-year ad buy from Patient Direct, it’s easy to conclude their experience match those reported on a facebook page titled The Community Network Scam!  the Better Business Bureau  and on Google .

In fairness however, the Patient Direct company states on a Better Business Bureau review, that:

“As a business owner it is your responsibility to ensure that you read and understand all the terms and conditions before signing; Customers are advised in the terms and conditions that termination must be received within the first 18 months if they do not wish to continue after the initial 2 year period, further more the rolling nature of the contract is stated in bold on the front of your agreement below your signature.”

If you believe you have been scammed, you can report it to the Canadian Anti Fraud Centre.