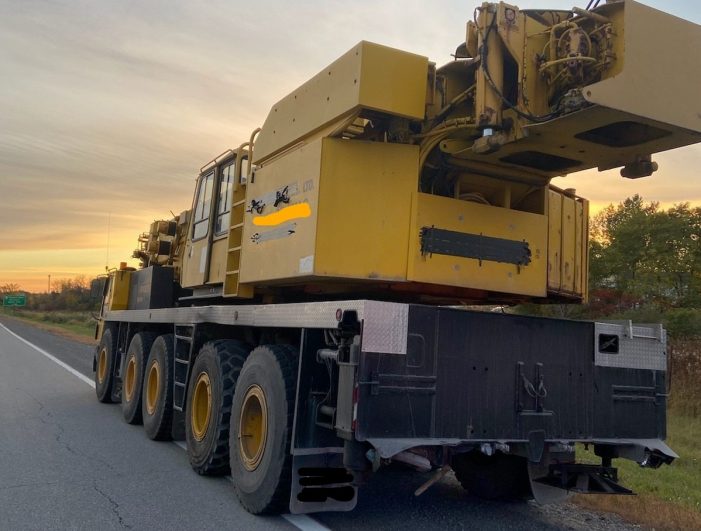 OCTOBER 15, 2020 – Members of the Leeds County and Grenville Detachments of the Ontario Provincial Police (OPP) located and charged a driver after a vehicle failed to remain at the scene of a collision.

On October 14, 2020 at about 5:35 p.m. Grenville officers responded to single vehicle collision near Water Street and Edward Street in Prescott. A crane was observed striking a power line, trees and posts surrounding a water fountain and fleeing the area.

The crane operator drove westbound on Highway 401, near Brockville followed by an accompanying vehicle. Both vehicles were stopped by police for investigation.

Matthew HINTON, 62 years old of Collingwood, Ontario was arrested and charged with:

Under the Highway Traffic Act:

• Drive motor vehicle, not equipped with an ignition interlock device

Furthermore, the company was charged with:

• Permit operation of vehicle with air brakes- no endorsement on licence

The driver of the accompanying vehicle was charged under the Highway Traffic Act with:

The accused was released and is scheduled to appear at the Ontario Court of Justice in Brockville at a future date.

#OPP Charge CRANE OPERATOR FOR IMPAIRED AFTER VEHICLE LEAVES COLLISION SCENE Near Brockville added by admin on October 15, 2020
View all posts by admin →