Will the Ottawa Sens or Winnipeg Jets Claim Mike Richards on Waivers by Jamie Gilcig JAN 26, 2015

CFN – We don’t want him. You take him.    The LA Kings have done something that only could happen in the day of the CAP age.   They have put Stanley Cup champ Mike Richards on waivers. Richards, has 5 years left on a contract at about $5.25M per year.  It’s a great deal […] 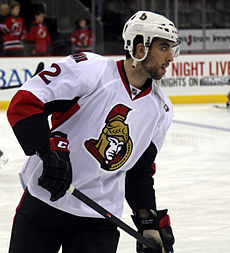 CFN – Ottawa Senator D man Jared Cowen recorded a very rare Gordie Howe hat trick Thursday night in the team’s 5-3 to Los Angeles. With coach Paul MacLean sacked the put on quite a performance, but the Stanley Cup Champs finished them off. Cowen took on Dwight King early in the second period. Jared […]

CFN – Well it’s time for round 2 of the NHL play offs.  Let’s see how I did in round one? Montreal over TB in 6 Hey who expected the Habs to sweep?   🙂 Anaheim over Dallas in 5 It took the Ducks 6 Pittsburgh over Columbus in 4 Columbus played some good hockey […]