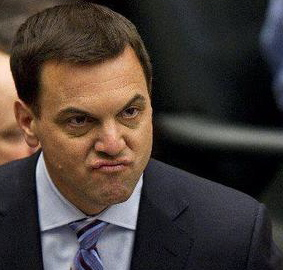 Cornwall ON –  PC leader Tim Hudak is going all out in the low blow high school antics politics as the writ is about to drop.    Video is being spread of a PC  candidate trying to crash a Liberal event in spite of the Liberals sending out a clear message that they would not be welcomed.

At events on Private property of course any group has the basic right to decide on admission as long as it doesn’t violate charter laws, etc.   This purposeful attempt at entry though; a direct confrontation begs to ask the question if Mr. Hudak and his team aren’t being hypocritical?

I myself, as a reporter attending events twice with Mr. Hudak himself, was forced to shut down my camera even though other media were present.   The excuse given was that they were concerned for those attending, but I could’ve shot stills of those same people or simply written their names in my coverage?

The last event I attended when invited I actually called ahead and asked if I’d be allowed to practice my craft without impediment which to Mr. Hudak’s staff credit I was given a full green light.

Politicians and political party’s controlling of their message is all part of the big picture of the game of politics.

You can’t cry foul when you play by the same rules.  It’s a petty tactic that most voters see through.   Maybe all parties should give public and the media full access to events?