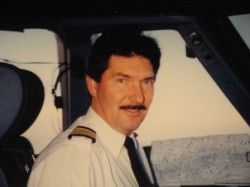 Last month (May 2012), I was visiting my relatives in Europe. When I returned home, I was so jet-lagged, tired, sleepy and miserable, it took me a week to be myself again.  How do pilots deal with jet-lag and fatigue after crossing many time zones, working during daytime and night time hours, crossing continents and oceans several times a month.

Fatigue is a problem in the airline industry, as well as in many other industries like trucking, bus and train transportation and many others that require shift work.  To minimize the effect of fatigue of employees, particularly in transportation industries, employees work and duty times are controlled by legislation. In some companies, work and duty times may be further restricted by collective agreements between the employees and the company. Coping with crossing many time zones and working at all hours is difficult. For example, personally, I try to plan my eating and sleeping times as close to my home time zone as much as possible. But that does not always work, because of the flight schedules. If I have to work a long transoceanic flight that departs in the evening and operates through the night, which would be typical of flights to Europe, I try to sleep for a few hours before going to work. How good a sleep do I get ? At times that is questionable. Then I have to stay alert through the dark and sometimes stormy night and be at my peak alert level at the end of say an eight hour flight, to land the airplane and get my passengers, my crew and myself, to the destination safely. As you can see the required level of alertness and fatigue go in opposite directions.

Flying through many time zones and not sleeping at the times that your body is used to, upsets your circadian rhythm, or your body clock. Researchers recommend several strategies that one can use to minimize those effects. Always get plenty of sleep. Sleep deprivation is cumulative. Food, alcohol and exercise can greatly affect quality of your sleep. If you are hungry before you go to sleep, have a small snack or a small drink, not a big meal. Caffeine and alcohol have a negative impact on quality of sleep. On the other hand, exercise can improve the quality of sleep.

On very long inter-continental flights there may be one (or two) additional pilot on the crew. The extra pilot’s function is as a relief pilot. The relief pilot flys in Captain’s or First Officer’s position while one of them is having a sleep in the passenger cabin or in a crew bunk, on airplanes which are so equipped. The pilots take turns sleeping during the flight, so that the Captain and the First Officer, who will be at the controls for descent and landing phase of the flight, will be well rested.