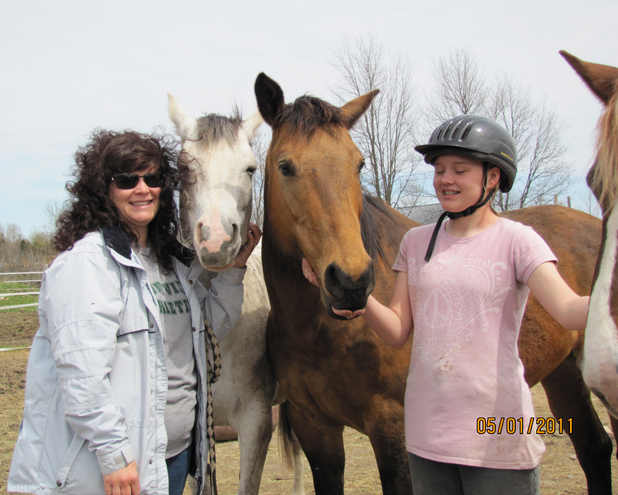 CFN – This Column of “Spirits in Unity” is being published by CFN for the community of Stormont Dundas & Glengarry. It is an honour to have you as a reader. I welcome any comments, questions or topics you would like me to discuss. I hope you enjoy reading about the wonderful world of horses and the impact that natural horsemanship can have in making it a better world for both horses and humans.

In horse Ville, knowing and understanding the prey-predator relationship is key.

I will be returning numerous times to this theme as it is paramount in truly understanding these magnificent creatures.

I will relate one interesting evolutionary development on horses and humans that came to light this past week during a very hot spell.

One of my students asked me why her horse was so full of energy in the heat and she was so drained.

This is another one of those prey-predator dichotomies that is so interesting.

Humans were once very hairy creatures, but they evolved to become hairless. Why did this happen? Have you ever noticed how your house cat just lies around all day when it is hot and then is very active all night? Most hairy predators don’t function in the heat very well because they don’t have a very efficient way of cooling down. For a predator to hunt in the hot sun, it would likely only end in their demise as the heat would do them in. Over time humans lost their hair and developed more efficient sweat glands to keep them cool. This allowed them to hunt during the day when other predators were resting (less competition).

Even today, the bushmen of Africa hunt by chasing down a deer or antelope for hours. Eventually the prey animal with its inefficient sweat system succumbs to heat stroke and is easily dispatched. Without the ability to sweat and thus cool themselves down, the humans would succumb, too.

The horse of the other hand, has developed differently.

He has one of the best sweat gland systems of the animal kingdom, which allows him to be active in the heat without harmful effect. As long as he has access to water to replenish the moisture he loses through sweating he is fine. So why does he get more active and sometimes a bit overactive in the heat around humans. Horses have a very keen sense of perception when it comes to predators. He instinctively knows that the heat is going to be a huge limiting factor on a predators ability to hunt during the hot daytime. And he often uses this knowledge rather effectively.

I have often seen how the horses give my students more difficulty in the heat and are often full of energy, at least compared to us. Horses are very good at playing games with predators. They have all the tricks. And it is fascinating when you come to understand the psyche of the horse’s mind.

And at night, when it cools and the predators are on the prowl, a herd of horses is a quiet as a bunch of church mice. I can remember trying to find my horse on a very dark night and suddenly finding myself running into a horse’s hind end and not even realizing that the herd was even there.

They have learned to be quiet so as not to attract predators. That is why they rely on silent communication so much.

In future columns I will be talking more about this silent language and how humans can learn it.

Horsetalker’s Horsemanship tip of the week:
Have you ever gone into the pasture to fix the fence and the horses that normally won’t let you touch them are all over you like a bad smell – sticking their noses in your tool box, nipping at your shirt and just being obnoxious? That’s great because you’re showing the horse that every time you come to the pasture, you’re not just there to get him and go work him. You can come and sit in the paddock and read a book. In our paddocks we have placed large rocks so we have a place where we can just sit there and let them be curious. We sit there in the pasture for awhile and wait. We make a game of it. Horses love games. The rules of the game are don’t touch him until he touches you first, then you can touch him back. This is sometimes called the non-demanding game. Come back a little later, stay another 10 minutes and then leave. Why is it that the horse is no longer afraid of you? Because you’re not acting like a predator on a mission to get him. The more you ignore your horse, the more he’ll come up to you – he won’t be able to help himself. Anything you can do to encourage his curiosity is going to also increase his confidence. If you have a really difficult horse to catch, when he gets investigative and comes up to you, give him a treat before leaving the pasture.

When dealing with horses, reverse psychology works very effectively. Often, the best thing to do is the very opposite of what your predator brain tells you to do. Remember, they don’t think like you.

If you are interested in learning about our Spirits in Unity Tour for 2012 or what other people interested in horse welfare are doing with natural horsemanship in our area you can become a member of www.meetup.com When asked type in the club name: Natural Horsemanship Club of Eastern Ontario.