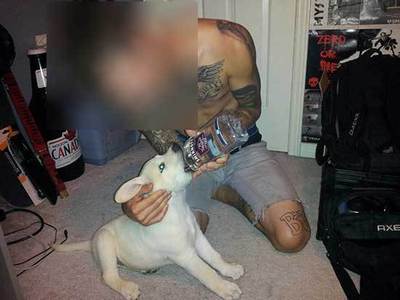 CFN – Alex Barker learned how fast and how emotional Social Media can be after this pic of him with his poochie was published on Facebook.    It went viral ending up with a police investigation and threats.

Alex posted publicly about it.   LINK

hi
alex here, the one who posted the photo
i deeply apologize for the offensive nature and content but the reality is THE DOG IS NOT CONSUMING ALCOHOL NOR WAS HE IN ANY SORT OF DISTRESS. the lid was most definitly on the bottle. i do agree and in retrospect i regret taking the photo, it is disgusting and probably the stupidest thing i have ever been apart of.
i deeply apologize
i would NEVER put an animal of any sort in harms way. i am not a cruel person.
the puppy was playing with the tops of the bottles and chewing at them so it just seemed like a photo for a laugh or two, that is of course not the case. i have removed the photo completely, i can and will include a photo minutes before that one was taken on the puppy in my arms.
i hope my apology can be accepted, even though im most certainly sure it wont be, i have no way of escaping this now that it has been blown in that direction, i deserve every shot taken at me and i once more will apologize.

Personally I’m really glad that this pup was not exposed to alcohol, but the issue for many is that these photos can inspire actions by others.   A lot of people don’t realize that depending on your settings and which Social media site you’re posting on these public images can be seen by people all over the world and are shared too.

That can lead to instances such as this.    It also can lead to people losing their prospective jobs; relationship break ups and in more positives cases, being discovered!

Social Media can be a tool and weapon.   Crimes have been solved and whole communities at times depend on it.  Some have even attributed the success of the “Arab Spring” on tweets and posts on Social media.

Do you think Alex should be prosecuted for this photo?   Is the world being too sensitive and how has Social Media impacted your life?