Spirits in Unity Column 12 and introduction by Garry “Horsetalker” Meek 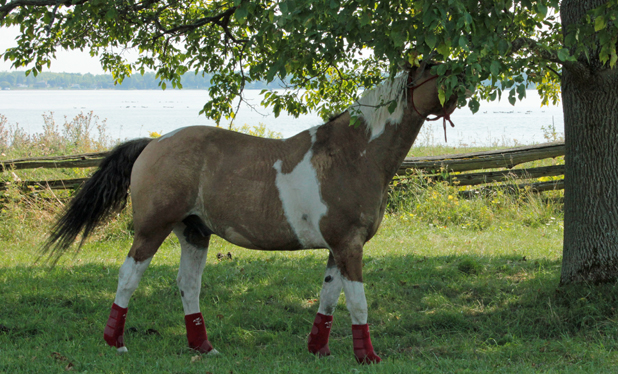 Time for an apple snack 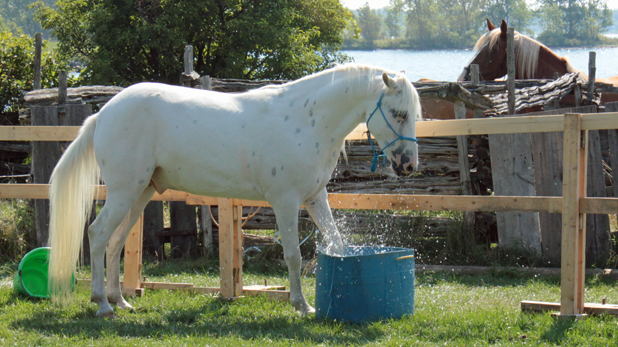 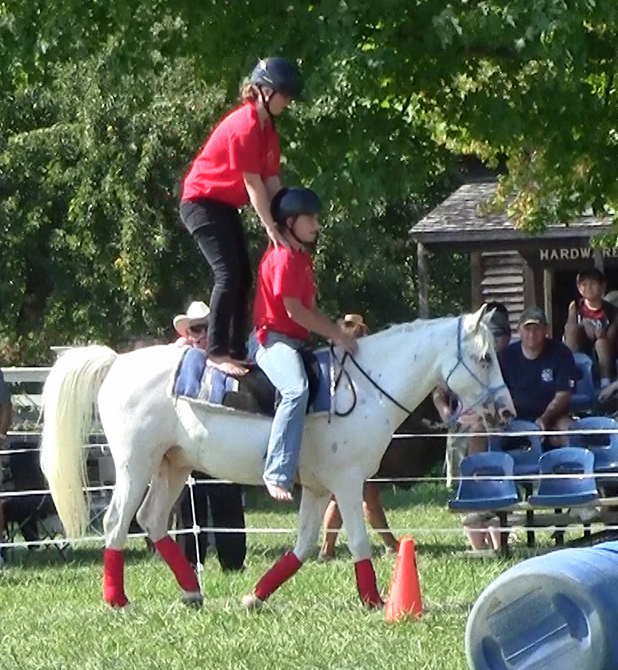 CFN – This Column of “Spirits in Unity” is being published by CFN for the community of Stormont, Dundas & Glengarry. It is an honour to have you as a reader. I welcome any comments, questions or topics you would like me to discuss. I hope you enjoy reading about the wonderful world of horses and the impact that natural horsemanship can have in making it a better world for both horses and humans.

Living the Dream
Oh My! My feet are sore, my back aches, my shoulder hurts and I have got tennis elbow from swinging a six pound hammer at this past weekend’s Spirits in Unity event at Horse Lovers Weekend at Upper Canada Village. But I am feeling no pain… only an overwhelming sense of gratification and pride in the over thirty participants and the way they handled themselves and their horses.

‘Spirits in Unity’ is a show like nothing you have ever experienced. It is based upon principles and not goals or rigid rules. There are no judges, no scores, no prizes for humans, but a whole lot of fun. It is part showmanship, part horsemanship, but mostly about having a great time with your horse and more importantly providing a great time for your horse. There are no disqualifications when things don’t turn out the way you might expect. And with horses, the unexpected is sure to happen. You see horses want to do what you want them to, but they also want to do what they want to do.

The event is based on the eight principles of natural horsemanship, all of which are designed to preserve the dignity of the horse and to give him the best deal possible. It is highly entertaining, educational and inspiring.

Each event fills the arena with horses and humans of different levels of ability and allows them to preserve both their own and their horse’s dignity in the process. They can push themselves and their horses to the limit, but never over their limit.

Members of the audience laughed, gasped, cheered and even cried at the way in which the participants connected with their horses.

In the final event of the day, The Savvy Spotlight, in which participants are allowed to develop and demonstrate any special talents that they have taught their horse, a young girl of 13 years thrilled the audience with her demonstration of bareback jumping. After several failed attempts at jumping over double barrels, she gently guided her horse to the barrels. Without whipping, or kicking, or pulling on the horse’s bitless bridle, but just gentle encouragement she guided her horse to the barrels again and again, each time allowing him time to regain his composure. And then at last he gained the confidence to clear the barrels to the cheers of the crowd. He received the biggest hug you ever saw from his young rider and the audience was brought to tears. I suspect he would have gotten the big hug regardless, such is the relationship between these two partners.

And then she took her victory lap and cantered past the audience while standing on her horse’s back. (Roman Riding) to more cheers from the crowd.

That is the essence of applying The Attitude of Justice in dealing with horses. When you truly understand the true nature of your horse and how he learns, thinks, plays you can then begin to tap into his natural talents. “There is nothing you can’t do when your horse becomes a part of you” says Pat Parelli.

In one of the Savvy Spotlight events, The ‘Leo Shotgun Style Vaulting Team’ brought out their mini trampolines and started jumping on and over their horses in a gymnastic routine. The four performers and three horses performed various vaulting manoeuvres. The cheers of one young adoring fan could be heard as he shouted, “Yeah Poncho, Yeah Cory”. It was four year old Thomas Bray who is not yet old enough to perform himself with his horse Poncho so he shares his horse with 5 other kids who call themselves Poncho’s Posse. As with other events at Spirits in Unity the music of Mary Ann Kennedy is used both to entertain but also to teach about the principles of natural horsemanship. As one of her songs, ‘Are there Horses in Heaven’ was playing, Thomas could be heard to say, “I hope Poncho is the last one to go to heaven.”

Each day ended with participants offering visitors rides on their ‘Spirit Horses’. For many it was the thrill of a lifetime. For one 80 year old grandmother it was one of the things in her bucket list finally achieved.

Thank you Upper Canada Village for allowing us to share the passion and spirit of dealing with horses naturally.

In our ‘Spirits in Unity’ program we believe in developing a trusting relationship and a true partnership with a horse before even thinking about getting on his back. He probably prefers it that way, too.

If you are interested in learning about our Spirits in Unity Tour for 2012 or what other people interested in horse welfare are doing with natural horsemanship in our area you can become a member of The Eastern Ontario Natural Horsemanship Club at www.meetup.com . There is no charge to join.