Stand up for your language rights! Howard Galganov to Appear Before South Glengarry Council November 13, 2012 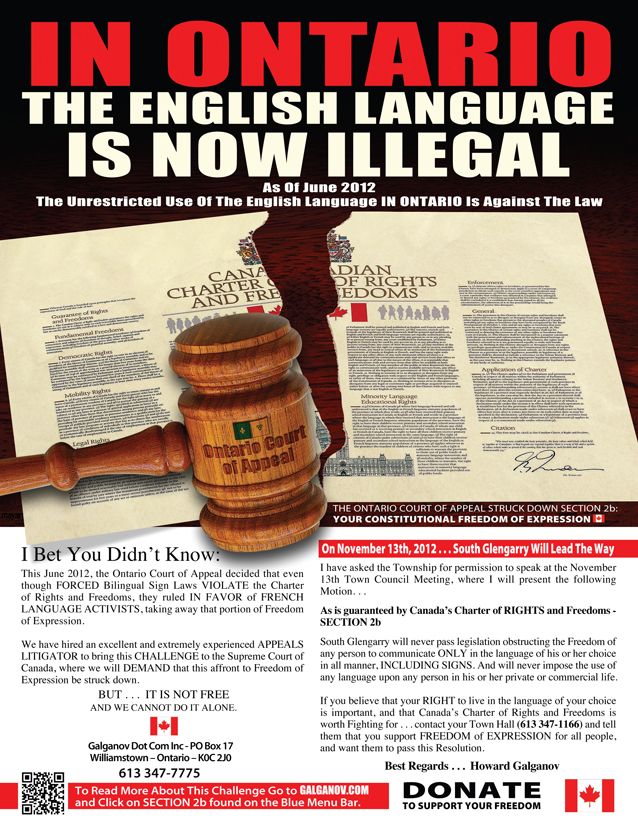 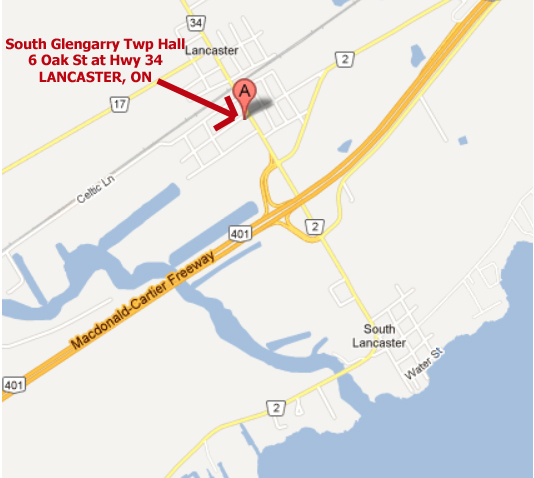 On September 26, 2012 . . . South Stormont Council raised the bar for Ontario and the rest of Canada.

The South Stormont Council UNANIMOUSLY adopted a ground-breaking RESOLUTION to honour a section of Canada’s Charter of Rights and Freedoms, by committing itself to NEVER infringe upon the RIGHTS of people to fully benefit from Canada’s Charter of Rights and Freedoms, vis a vis our GUARANTEED FREEDOM of EXPRESSION, specifically in regard to the RIGHT to communicate in the language of anyone’s choice on commercial signs.

The UNRESTRICTED use of the English Language in Ontario is NOW against the law:

As of June of this year (2012), the Ontario Court of Appeal ruled that even though FORCED Bilingual Sign Laws VIOLATE Freedom of Expression . . . but, because these laws favour the French language over the English language, it is appropriate to allow municipalities to take away this FREEDOM, by forcing ENGLISH businesses to post signs in French, whether the individual merchant wishes to communicate in the other language or not.

Your inalienable right to live and work in the language of your choice has been violated. So what are you going to do about it?

SHOW UP AND BE COUNTED:

At 7:00 o’clock on November 13, 2012 at the South Glengarry Town Hall, in Lancaster  at 6 OAK STREET at the corner of  CTY ROAD 34, you will have the chance to be seen and heard in the language of your choice, so don’t leave the FIGHT for your FREEDOM of EXPRESSION up to others.

There is no guarantee that the Council will even want to vote on this Resolution on the 13th, likely not, since most people seem to want to leave our fight for Freedoms up to our brave troops overseas, while our political leaders are too timid to even raise their voices for our own FREEDOMS at home.

Make your voice heard and call the South Glengarry Council to tell them that you want them to pass this resolution in support of Canada’s Charter of Rights and Freedoms.

Call now and tell everyone you know to call too.

204 Responses to "Stand up for your language rights! Howard Galganov to Appear Before South Glengarry Council November 13, 2012"