Lyndsey Elizabeth Picks her Top Ten Montreal Canadians Prospects – Do you Agree with her? 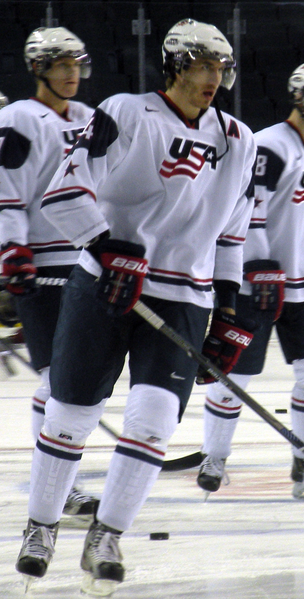 quite some time now. Poor drafting has not been the problem for the Habs; Trevor Timmins has been the beacon of light for this team during the bleak, bleak Gainey-Gauthier era of horrible trades and under sized players.

When the Habs major prospect like Max Pacioretty, PK Subban, Carey Price, Ryan White, David Desharnais, Lars Eller and Alexei Emelin all made it up to the NHL many thought the Habs would be in a San Jose Sharks spot with their prospect pool. Thanks to a horrendous season and the talents of Trevor Timmins and his staff the Habs will be back on track in no time. Here is a look at the Montreal Canadiens top 10 prospects.

Alex Galchenyuk -6’2, 205lbs Centre:  In due time he will be the big bodied center the Habs have been after for over a decade. He has an amazing hockey sense, hands and vision which allow him to see everything on the ice. He can create fantastic plays your average prospect could not. Galchenyuk is a complete player and makes everyone around him look better.

Nathan Beaulieu- 6’2, 194lbs Defenseman:   A highly mobile, puck-moving offensively talented defenseman, Beaulieu is a smart shooter and risk taker. He can quarterback the power play and make things happen on the rush. He is highly creative with the puck and is a fantastic play maker.

Brendan Gallagher-5’9, 182lbs Right Winger: Gallagher is always able to find space in high traffic areas and battle along the boards. He will never have a passive shift, with good overall skills, natural talent and killer instinct for the game he is a force to be reckoned with.

Louis LeBlanc-6’0, 190lbs Centre:  Leblanc is a talented cerebral power forward. Not afraid to play a physical game, he battles for the puck and is nearly unbeatable in the corners or on the boards.  Leblanc has superlative hands and an outstanding shot. Jared Tinordi- 6’6, 219lbs Defenseman:  He is gargantuan in stature and not afraid to throw that size around.  Tinordi is purely a defensive defenseman.  He can separate the puck from players and protect the corners and around the net.

Sebastian Collberg- 5’11, 181lbs Right Wing: Collberg is an amazing stick handler with a killer wrist shot. Despite his size he isn’t afraid to get into the dirty areas to score goal and battle against the boards. At 16 years old he is playing in the Swedish elite league.

Michael Bournival- 5’11, 191lbs Center:  Despite his size Bournival is tough player who is not afraid of a physical game. He is a very versatile player that excels on the penalty kill, face off and playing a shutdown role.

Morgan Ellis- 6’1, 202lbs Defenseman:  Ellis earned this spot via his massive improvement last season. He is a solid gritty defender, like a lot of the players on this list he plays a tough style of hockey. Ellis gets into the corners and outmuscles the opponent for the puck. He has a superlative hockey sense and can quarter back the power play.

Danny Kristo- 5’11, 188lbs Right Winger:  Kristo is not the most consistent player but he certainly has an NHL caliber skill set. He is a pro level skater and passer, his shot and release is spot on. He also can occasionally play a grittier defensive game. Danny Kristo has all the skills he needs to go pro all he needs is the consistency.

Patrick Holland- 6’0, 175lbs Right Winger:  Holland similarly to LeBlanc is an incredibly cerebral player.  He is a hard worker and knows how to finish when his team needs it the most. Holland is not a flashy player; however he seems to do it all. He is an asset on the penalty kill and has fantastic vision on the ice.

Who do you think are the best Habs prospects Habs fans?  You can post your comments below!

Editors note: Lyndsey, who is based in Montreal,  will be covering the Habs, and hockey, lock out or not for CFN.   If you wish to contact her or sponsor her column email us at info@cornwallfreenews.com

Lyndsey Elizabeth Picks her Top Ten Montreal Canadians Prospects – Do you Agree with her? added by admin on November 15, 2012
View all posts by admin →