Want to End the NHL Lockout? Boycott the Sponsors – A Quick Solution to a Silly Stoppage of Play 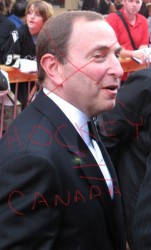 CFN – So you’re a frustrated hockey fan.  It’s all Bettman’s fault. It’s the greedy players fault!  Why won’t they just lock Fehr & Bettman in a room and not let them out until there’s a deal on the table?

There’s a lot of whining going on from the few hockey fans left that care about the lockout.

Yes there are lots of hockey fans.   The billions of dollars per year prove that, but fans, and all those that depend on hockey are at a stand still while the powers that be try to see who has the biggest penis when we all know that neither probably have much be waving to the gods.

Every day that goes by another nail goes into this season’s coffin.

What fans are missing and anyone that cares about hockey is that this is all about MONEY.

And that being said the greatest way for fans in their cities to end the lockout is to vote with their money.

For example the Habs are owned by a Molson and guess who sells a lot of beer because of les boys?

Habs fans boycott Molson’s until this lock out is over.      Here’s some  email addresses for Molson/Coors in Canada.   LINK

Tell them that you won’t buy their products until this lock out is over.

If you’re a Leafs fan.  They are owned by a consortium that includes Rogers & BCE.  LINK

Betcha if they see a 2-5% swift drop in sales or cancellations of service they’ll be on the phone to the NHL with a nudge or two.

IF this is all about your money shouldn’t you have a say in how these monkeys are dancing?    All you have to do is figure out who owns your NHL team and which companies are their biggest sponsors.    Keep it local or go from team to team, but if enough fans let enough powers that be know that you will be voicing your concern less on talk shows and more at their bank accounts this lock out should be over before you can blink!

What do you think hockey fans?   You can post your comments below.

Want to End the NHL Lockout? Boycott the Sponsors – A Quick Solution to a Silly Stoppage of Play added by admin on November 19, 2012
View all posts by admin →