Beavergate in Cornwall Ontario One Year Later – It was a Success! Clear Guindon Park Waters with no Flooding! 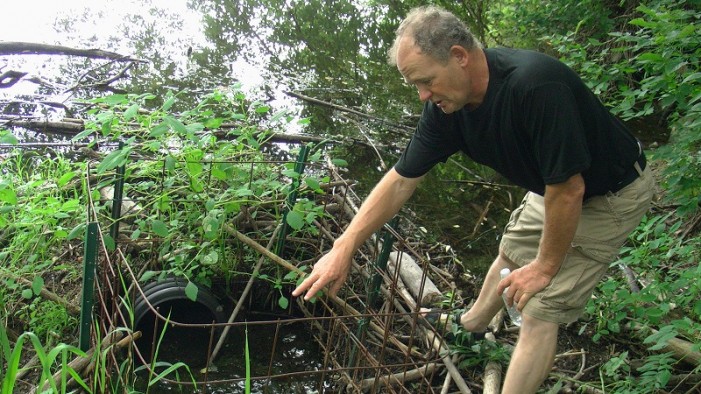 CFN – What a difference a year makes.  When we started the Beavergate Protest we never expected that the devices placed in the Guindon Nature Park in Cornwall Ontario would have such dramatic results.

Funded fully by Lesley Fox and her Fur Bearer Defenders organization the road to clearer waters and healthier habitat were started by Wyatt Walsh pictured above.

Instead of signs that dogs and small children can’t read there is lush green.   Mr. Walsh had one abortive attempt after contacting the Standard Freeholder go on deaf ears before CFN became active in trying to find a solution.

Our request for a 90 day moratorium on trapping to the City last year resulted in the traps being moved next to the lodge and wiping out the family of beavers lived.

That’s when local activist and musician Rebecca Sorrell entered and then with some media momentum and help from Lesley Fox and her organization oiula!

Even though with near record rainfall the park was not flooded.  Nor did the beavers eat all the trees as some suggested would happen.

The park has never looked better.

You can see from this video from last year below how much has changed.

Placement of filter system where first traps were!

All we had asked for originally was a moratorium simply to discuss alternatives to trapping.  Sadly it go messy because of closed minds and only when the threat of National humiliation and free implementation did the Kilger regime agree to change.

As a matter of fact OPG (Ontario Power Generation) rep and now retired Linda Haliday actually refused to participate in one group meeting if I was present; that’s how nasty it got to get to this point. Sad, don’t you think?  Especially when Lawyer and ambitious politician  Bernadette Clement sat on the board of the River Institute at the time.

The River Institute did not assist or help with this project.  There was only one city councilor who showed support, but he chickened out and refused to go public.

The City of Cornwall did not respond for comment to this story.

What do you think the with results to Guindon Park?  Is it time to look at alternatives to trapping?   You can post your comment below.

Beavergate in Cornwall Ontario One Year Later – It was a Success! Clear Guindon Park Waters with no Flooding! added by admin on August 12, 2013
View all posts by admin →

11 Responses to "Beavergate in Cornwall Ontario One Year Later – It was a Success! Clear Guindon Park Waters with no Flooding!"