Crunching Cornwall Public Library Numbers – Is it time for change? by Jamie Gilcig 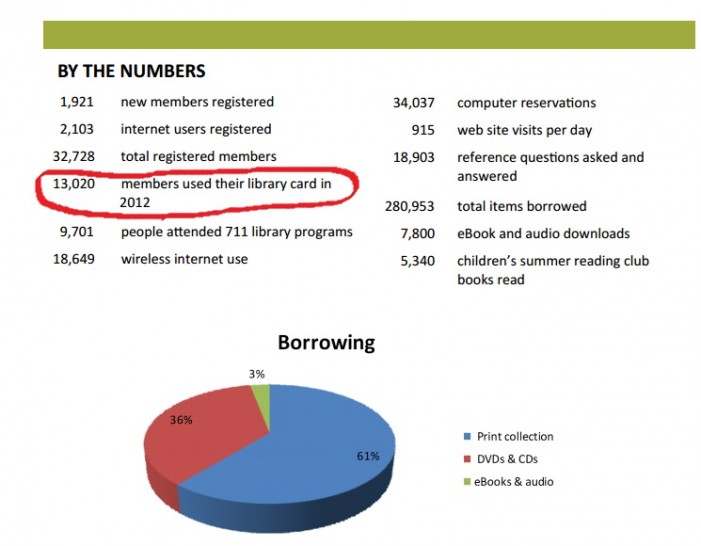 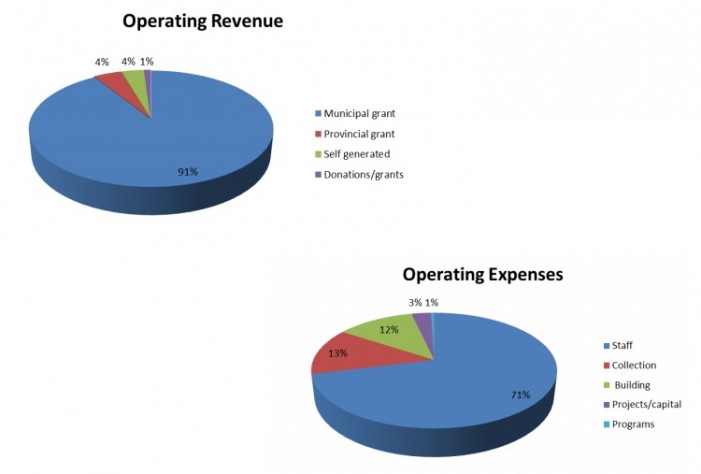 CFN – Libraries are important.    Their uses are changing as time dictates technology and the public dictates demand.   With the cost of internet and cable being high for those on fixed incomes more and more people use the library to borrow DVD’s and use the internet.

The funny thing about presentations is that they are rarely if ever audited.

The City of Cornwall has its library in the heart of downtown taking up one of the most prestigious pieces of real estate.  The former post office is still in lovely condition and one of the nicest buildings in the city.

It’s annual budget, according to the library’s 2012 report  is a little over $2M.

The question is whether the public is getting value for those dollars?    Looking at their own numbers again the largest item is wages and benefits which comes out to 2/3 of the total.   That’s .67 cents out of every dollar.

The amount spent on actual Collections & Supplies?  About 1%. Likewise the utilization of space.   Nearly all of the top space on the ground floor is given to books which are in declining use while Internet space is still limited in units available and amount of time available.   The units are also older.

That’s quite an amount of money to be pumping out to each member especially as membership is free.

In these times especially it might be a good exercise to re-examine how our libraries are used and staffed.   Do we need as many actual librarians and their skill sets and cost if usage is shifting to video rental and computer use?  For example according to the Library’s UNAUDITED borrowing numbers  over 1/3 of usage is in borrowing  DVD’s and CD’s.    Do we need to support as much highly trained staff which eat up 2/3 of the operating budget?

Am I recommending moving or eliminating the library?  Heck no.   I just think that we need to focus more on what the public wants and needs and less on keeping staff numbers up.

And maybe some of those dollars saved could be channeled into better computers that allowed users to spend more time?

Like any bureaucracy Ms Kiddell always will be seeking more funding.   That’s fine; but surely she should not be given continued free passes by the city when taxes are going up.   And surely the library would be a more attended and used place if it reflected more of what the community wants and needs instead of an antiquated vision of yesterday?

And maybe, just maybe, it’s time to share some of that buildings space with an Art Centre in Cornwall which we are sorely lacking and with Mayor Kilger and Council committing available monies to the Benson Centre simply won’t be available for about a decade?

Crunching Cornwall Public Library Numbers – Is it time for change? by Jamie Gilcig added by admin on September 10, 2013
View all posts by admin →

20 Responses to "Crunching Cornwall Public Library Numbers – Is it time for change? by Jamie Gilcig"