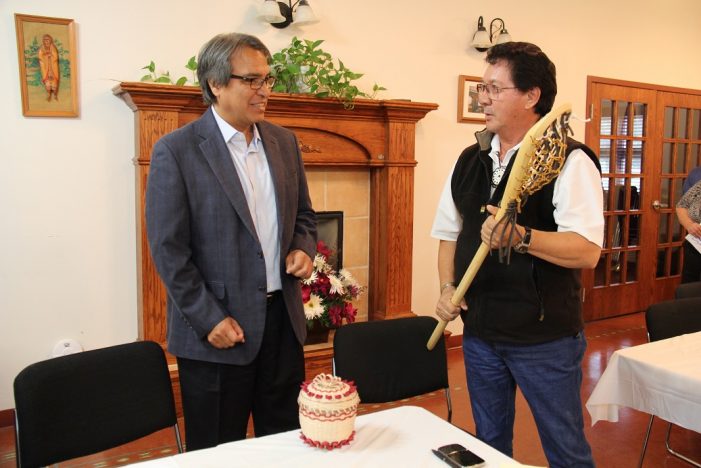 Akwesasne – United Nations Special Rapporteur James Anaya visited Canada this week on a special assignment, conducting hearings across the country to examine the relationship between the government of Canada and First Nations people.  Mr. Anaya made Akwesasne his first stop on Oct. 7, hearing presentations from community officials on Akwesasne’s experiences with the Canadian government.

“Mr. Anaya’s last-minute decision to visit Akwesasne was a pleasant surprise,” said Grand Chief Mike Kanentakeron Mitchell, who had been planning to present to the Special Rapporteur at a scheduled hearing in Ottawa.  “His eagerness to learn about Akwesasne’s situation as a border community provided us with the golden opportunity to acquaint him with the daily complexities of Akwesasne life, and the issues we have faced with the federal government.”

“The Mohawk people and Akwesasne community are famous around the world,” said Mr. Anaya during a hearing planned at the A’nowara’kowa Arena on Kawehno:ke (Cornwall Island.)  “This is the first community I’m visiting during my nine day stay in Canada and this is a place I’ve heard a lot about over the years.”

.
Mr. Anaya said the United Nations requested permission from Canada to conduct the research and report. On Oct. 15, Mr. Anaya held a special conference describing his initial findings, and a detailed report will be forthcoming in the months ahead.

“I’m hoping that by raising these issues with the Canadian government, by including them in my report, and making appropriate recommendations, that I will be able to draw further attention to these issues so that you can move toward resolution of them,” Mr. Anaya said, addressing a group of Mohawk elders in a follow-up meeting at the Tri-District Elders Lodge on Kawehno:ke.

“Why do we face scrutiny [at the Canadian Port of Entry] when proudly declaring our membership to the Kanienkehaka Nation?” asked Francis-Herne, representing the Akwesasne youth.  “Why do we feel singled out and profiled, sometimes being made to feel criminal?  And why is it so hard for us to travel from one part of our community to another?  It is not about having special rights, it is about having human rights.”

.
Council lawyer Micha Menczer pointed out how it’s Akwesasne community members trying to live their daily lives who are suffering.  The Mohawks, he said, are not asking for anything special, they are simply asking to go about their lives without having their rights violated daily. “Resolution is possible but Akwesasne must have their rights respected and a willing Canadian government partner to negotiate practical arrangements for daily travel in the community across the international border. This has not been the case to date.”

The resulting change of the duty to report from Cornwall Island to Cornwall has severely hampered the ability of community members to go about their daily lives. The Mohawk people cannot travel to school, work, sporting events, doctor’s appointments, cultural workshops, birthday parties, or conduct any of their daily business without encountering lengthy delays in first leaving Akwesasne, to report to the Canadian government, and then returning to Akwesasne.   Akwesasne’s proposal to have alternate reporting arrangements (common in other parts of the country) implemented in Akwesasne has not been accepted by Canada.  In the words of many community members:  “We feel like hostages in our own lands.”

Community members who do not abide by the reporting requirement are punished by having their car seized and a minimum $1,000 fine applied. This has been called Canada’s retaliation against the Mohawk people for their refusal to allow guns on the territory.

Mohawk Council currently has several cases against CBSA before the Canadian Human Rights Commission based on the unfair Duty to Report, a lack of accommodation to emergency services utilizing the bridge crossing at Akwesasne, and a failure of CBSA to recognize tribal identification, Haudenosaunee passports and other identification that allows Mohawks to identify themselves as Mohawks rather than as Canadian or American citizens.

Canada’s injustices against Akwesasne aren’t limited to the bridge and border crossing issues.  Canada has failed to uphold their legal obligation to consult with and accommodate the rights of the Mohawks of Akwesasne in many other areas. This is seen in the enactment of several Bills that significantly impact First Nations people.  Those bills are in relation to safe drinking water, marriage and property laws, and education.  If Canada is unwilling to consult with First Nations before passing legislation that immediately affects them, then the Federal Government should at the very least be incorporating clauses that allow time and opportunity for First Nations to develop their own legislation to regulate their own water, property, and education laws.

“Mr. Anaya’s visit comes at a time when Canada and First Nations people are realizing the tensions that exist,” said Grand Chief Mitchell.  “For years, Canada has tried to keep Indigenous issues tied up in its bureaucracy and red tape.  On many occasions the Canadian courts have reminded the federal government that it’s best to negotiate a solution rather than expect the Canadian courts to interpret Indigenous rights, then have the government fail to execute them.”

.Photos courtesy of the Mohawk Council of Akwesasne