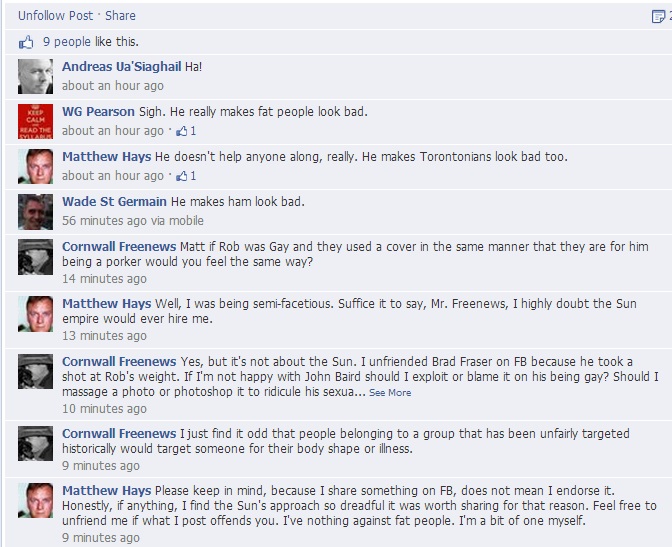 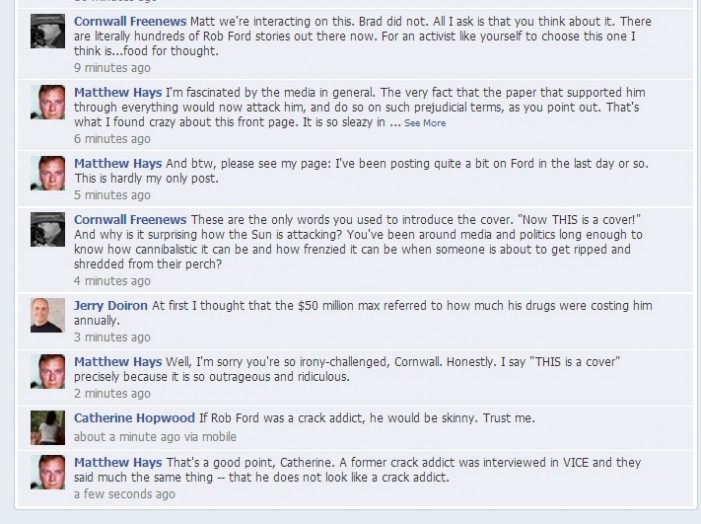 CFN – Today Matt Hays unfriended me on Facebook over Rob Ford.  Matt, besides being an extremely gifted and talented writer, editor, and educator, was also my first editor.   He also is a gay activist and I can understand why the gay community has issues with Rob Ford.

They certainly are not without merit as Mr. Ford would never be misconstrued as a FOD.   (If you don’t know what FOD means you probably aren’t very gay friendly)

My issue with Matt, as it has been with a few other Gay activists is how they target Mayor Ford for his girth.     As I shared with Mr. Hays before he decided to turn tail and retreat from an argument that he clearly lost on was that if I had an issue or commented on John Baird and used his homosexuality in this manner I would be tarred and feathered. Mr. Hays tried to dance; but it wasn’t Frankie Goes to Hollywood on the juke.  It was him getting caught showing a prejudice against LARGE people which isn’t all that uncommon.

Mayor Ford deserves a lot of derision and frankly should resign and go get some help; but to target his weight is just as bad as targeting someone actions based on their race, gender, or sexuality. Of course not everyone you engage on facebook in a clean debate or discussion owns a newspaper to rebut; but Matt’s action in this case; unfriending rather than simply retreating or possibly apologizing is the irony; and of course it means that I could no longer further respond.

For a Gay activist like Matthew Hays to post that photo and initial comment is not really ironic.  It’s not tongue in cheek.  It’s not poking fun at the Sun.   It’s ridiculing someone that deserves ridicule, but not for the types of labels that he has fought long and hard against.