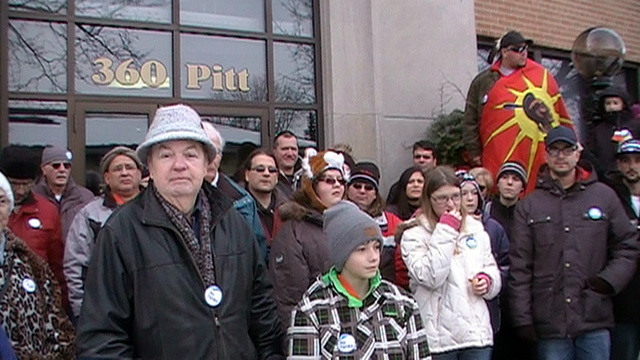 Cornwall Ontario – It’s really weird covering a story when you’re in the story.    As many of our viewers know I’m an activist at heart.   Beaver Gate; defeating Wal-Mart over the First Student Drivers Survivor Weekend, finding lost dogs and people…

So when I discovered and started to cover the Chem Tanks being sleazed in the night onto our Waterfront after taxpayers covered the cost of remeditating the land of the old Kaneb Oil tanks my outrage was similar to many who care about the future of Cornwall.

Of course this being Cornwall and the fact that far too many have drank our water for too long; another reason to not have these tanks on our waterfront; we were not given certain press releases and not everybody rowed in the same direction.

I decided last week that we the people had to make a statement.   Chuck Charlebois has worked hard and been able to present some info; but the first rally in front of the construction site and those that attended were mostly connected to the city hall cliques; not the average citizen; nor was there representation from our neighbors in Akwesasne.

So I called for a peaceful rally from Guy Lauzon’s office to City Hall; a 3 block walk.   The point of it being that the public should come out and make their voices heard to those that are allegedly representing them.  We even had some pins made.

I sent out a release to the media and mucky mucks not only announcing the event; but to the media in the city that I would not publish anything until 36 hours later as I was wearing my activist hat and not the hat of editor of CFN.  Likewise I waited for a day to give the other media a chance to go first as I was an activist in this story.

Nada, no announcement of the rally; which was a simple enough protest to help those making decisions hear from the public.

Well sure enough some of those media showed up to cover the event; mostly to trash it; one outlet reported only 30 people showed up and while the crowd was not the 1,000 I thought would really make a statement; we certainly tripled the amount the Freeholder announced.

And how many times have you seen a procession down Pitt Street of people coming together and supporting Cornwall?    Some residents of Akwesasne did show up as CKON mentioned it after one of the attendees called in.   Our Facebook event page had over 3,300 invited even though I only personally invited a few hundred, and we gave away 87 pins.

City Councilor Maurice Dupelle showed up as did candidate Todd Bennett and still unannounced, but rumored to be running Leslie O’Shaughnessy and Mark MacDonald.  No representation from the Chamber or any other of Chuck Charlebois’ team; nobody from the NDP who claim to have a love of the enviornment; frankly it was boggling, but that ladies and gentlemen is Cornwall.

Baby steps.  Saturday gave me and those attending a lot of hope.  It also clarifies how important it is for we the people to not just sit back and trust those elected but to ask questions; learn more about important issues, and sometimes get more involved.  When enough people work together magical things can happen!

While Mayor Kilger and City Council seem to be trying to label Transport Canada and Trillium Distrubution as bad guys the bottom line is that as long as they are covering up the truth about their own handling of this mess; with the City via Economic Development knowing in February and Spring 2013 we simply have to get more involved if we truly don’t want these tanks in.

The construction should never have started.   We don’t really need to see the Trillium lease at this point because it should never have been signed.   And if Trillium has their lease broken they will demand compensation and no matter how it’s spun it’s your and my own pockets that will be emptied to pay for it.

So I’d like to announce that I will be seeking members of the public to form a 5 person committee to help get some answers and try and make sure we the taxpayers of Cornwall Ontario are not gouged too much and that those at City Hall are held accountable for this mess so that it never occurs again as Councilor Clement suggested at the last council meeting.

The only way to make Cornwall better is if we the public make it better.   I also am creating a new petition with a simple question asking for the City and Transport Canada to share the truth as it is our money after all.

We really need to all put our differences aside and work together and stop trying to sabotage the common good as happened to this rally Saturday.  It shows how much the average person does care and again; it gives me hope for our community.  I personally invite everyone in our community and our neighbors to participate in removing these tanks.