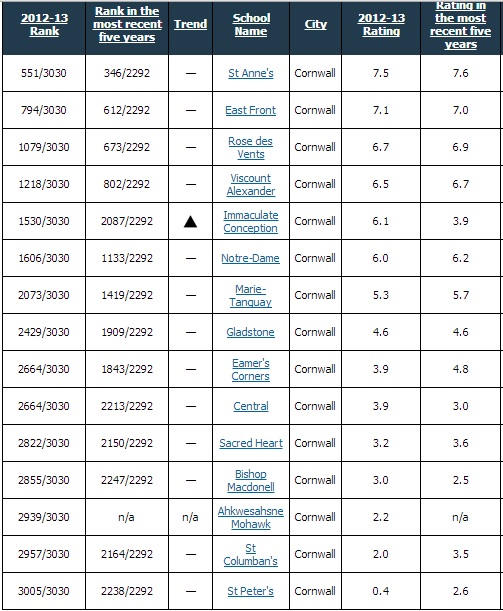 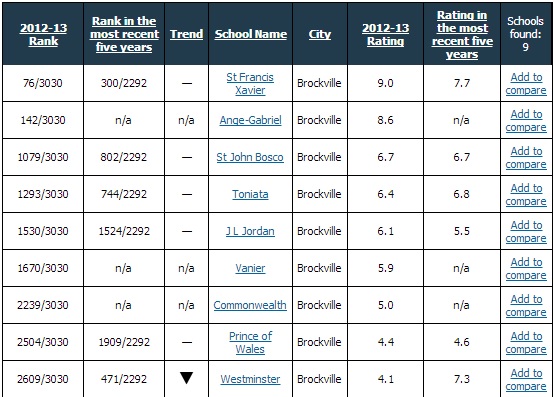 CORNWALL Ontario – So which schools in Cornwall improved or receded in 2012 according to the Fraser Institute Canadian study? East Front jumped to 794 this year after scoring 1518.  Kudos to the kids at East Front!

So what is causing our Cornwall area schools to rank so poorly?  Is it the Fluoride in the water?  Poor teachers?  Economic suffering as the per capita incomes are lower in Cornwall?   Healthcare?  Not enough local stimulation and activities?

Is it simply that our best and brightest move away and that what’s left score lower?   Are the bars dropped too low instead of being raised high?   The Fraser report has been criticized locally; but would that criticism be there if the scores were higher?

So let’s look at nearby Brockville Ontario which has a population of about half of Cornwall, but whose economy is nearly triple. Over half of Brockville’s schools score in the top half of the rankings with St. Francis Xavier ranking a very impressive 76/3030.

So how is it that Brockville seems to do such a better job of educating their kids than Cornwall does?    Is the system skewed toward our friends 90 KM to the West somehow?

And why do the Catholic schools score so much higher than the schools under the UCDSB?

Is it the culture?   Is it the impact of parenting on educating their children in this day of limited budgets for schools to work with because some school boards are busy spending money on high priced Toronto legal firms?

The good news for Cornwall Ontario is that there’s a whole lot of room for improvement.   The question is if the will to do so is within the community?

What do you think dear viewers of CFN?  You can post your comments below and please note that if you wish to post anonymously (with a pseudonym) then you have to register with us via email.  Please send your verifiable name, address and phone number (like a letter to the editor) with your choice of user name.

Please click the banner below to help support Independent Media.

For as little as $25 per year you can help us grow and deliver the news you click on daily!

UCDSB & Cornwall Schools Fall in Fraser 2012/13 Report – Why Does Cornwall Score Worse than Brockville? added by admin on February 4, 2014
View all posts by admin →

41 Responses to "UCDSB & Cornwall Schools Fall in Fraser 2012/13 Report – Why Does Cornwall Score Worse than Brockville?"