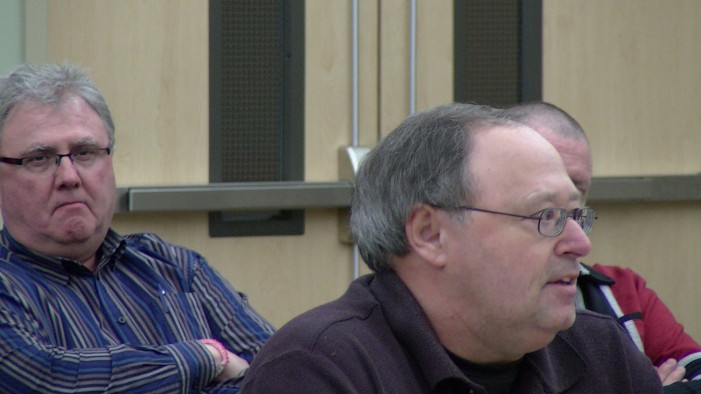 A special council meeting over the new health clinic in Ingleside was held and Ms Hart was the lone voice against moving the near $1.5 million dollar project forward.   The current clinic, with four doctors serving not only Ingleside, but many patients coming as far away as Cornwall.   Local pharmacist Bryan Haley is set to expand his Ingleside Pharmacy by purchasing and expanding into the current clinic.

Ms Hart was seen after the meeting telling a small contingent of contractors led by Roy Perkins (pictured below on left) that “she tried.”  The questions are what exactly did she try to do as the construction team set to go has a history of hiring local sub contractors at the projects they completed for this group in nearby Morrisburg and Iroquois?

Mayor Bryan McGillis summed it up below before the vote.

Video from the meeting.

Deputy Mayor Hart also was involved in a Facebook group that was taken down by the social media site for the use of hate symbols and harassment. When asked at the same meeting above this was her response. (She also is actively participating in the group reformed by the founder of the original group taken down by facebook.)

Ms Hart previously was taken to task when she complained about the cost of hiring an integrity commissioner regarding complaints of her behaviour towards fellow council and staff. (see Councilor Woods comment in the video below.)

When Mr. Robert Swayze conclusively ruled against her she refused to cover the costs of that process out of her own pocket.

Do you think Deputy Mayor Hart should resign?