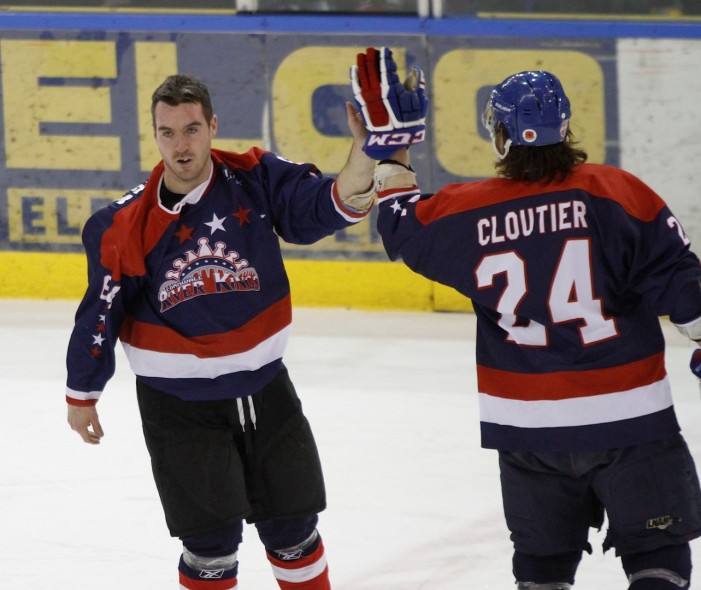 CORNWALL Ontario – Loic Lacasse backstopped the River Kings to a 3-2 victory over the Thetford-Mines Isothermic on Saturday night in the team’s final regular season game of the season.

Lacasse was named the first star with a 42-save performance.

Cornwall will now get ready to face the defending champion Jonquiere Marquis in the best-of-seven first round. The 7th place River Kings finished the regular season with a 16-20-4 record. Jonquiere defeated Riviere-du-Loup 6-5 in overtime on Saturday to clinch second place.

Maxime Villemaire opened the scoring for Thetford-Mines at 13:17 of the first, but Bobby Mazerolle replied 47 seconds later for the River Kings. Mazerolle went in on a semi-breakaway and beat Kevin Desfosses with a beautiful wrist shot right under the cross bar.

Nicolas Corbeil gave the River Kings their first lead of the night at 9:37 of the second. Mazerolle won the faceoff right to Corbeil, who deposited a wrist shot through Desfosses legs.

At 1:02 of the third, Corbeil scored a highlight reel goal with a bullet wrist shot. Corbeil came flying into the Thetford-Mines zone and picked the top corner, knocking the water bottle off the top of the net, for his 25th of the season.

Sebastien Courcelles rounded out the scoring with 23 seconds to play.

Simon Desormeaux made his home debut for the River Kings. He dropped the gloves with Joel Theriault, who was playing in his final LNAH regular season game.

Lacasse was outstanding on Saturday night. One of his biggest stops of the evening was a flashy glove save he made on former River King Alex Bourret late in the second period. The Isothermic outshot Cornwall 44-30.

Corbeil (second) and Mazerolle (third) were the other stars.

The playoff schedule vs. the Marquis is yet to be determined. Tickets go on sale Tuesday. Prices are $12 for adults, $9 for students and seniors and $5 for children under 12.

ROAD LOSS: On Friday night in Sorel-Tracy, Eric Bertrand had a hat-trick and added three assists as the Eperviers downed the River Kings 7-3. Mazerolle and Corbeil each had a goal and an assist for Cornwall, while Ryan Jardine also chipped in with 12th of the season.

Cornwall Ontario River Kings Make Play Offs Take on Marquis in LNAH Round 1! added by admin on March 16, 2014
View all posts by admin →