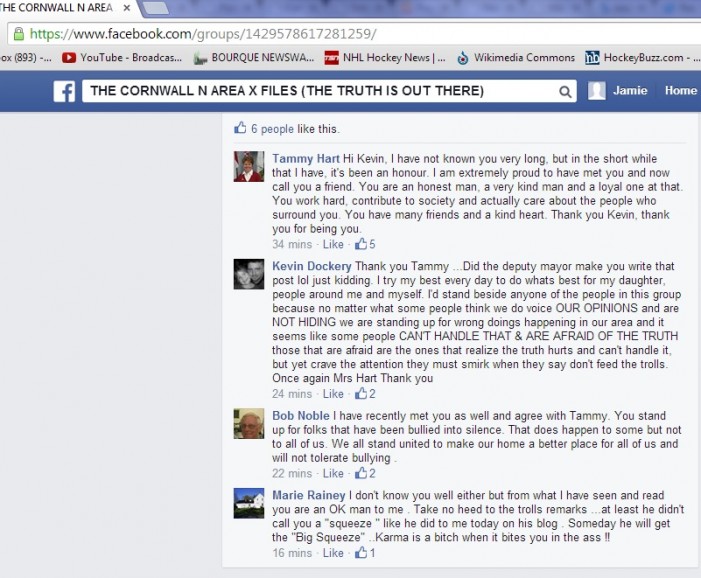 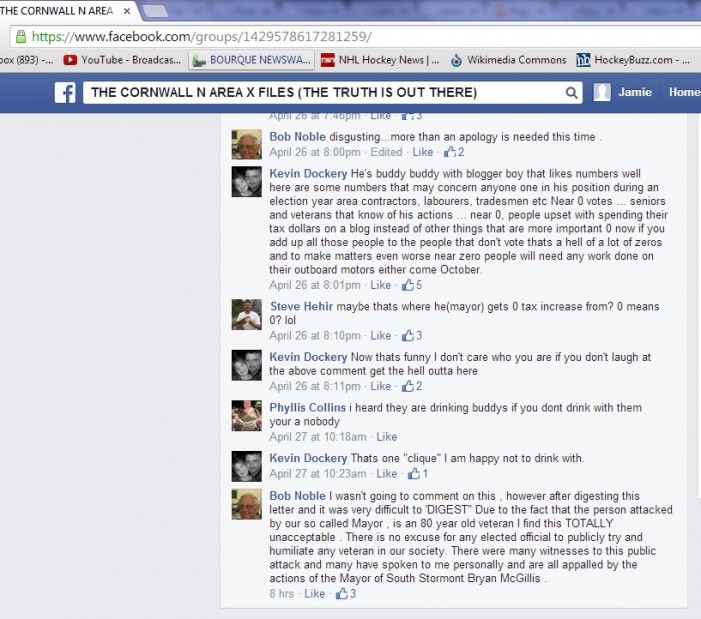 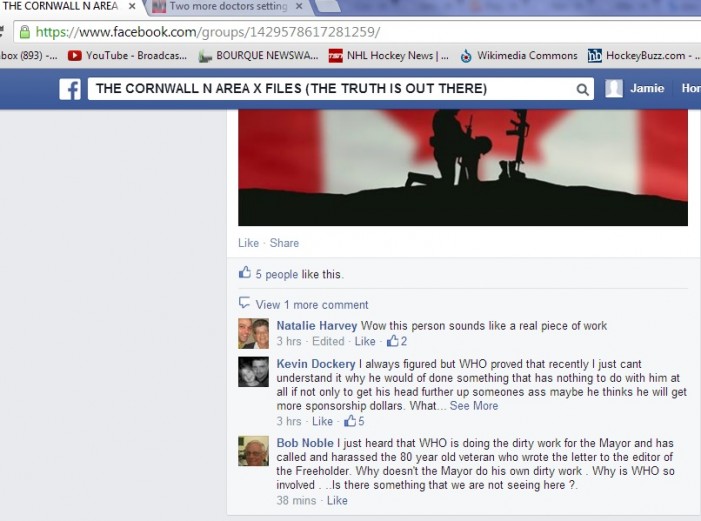 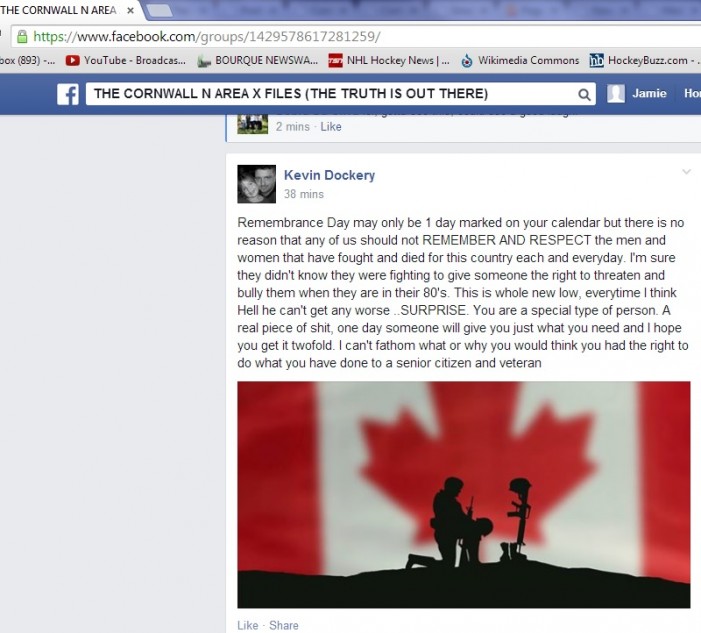 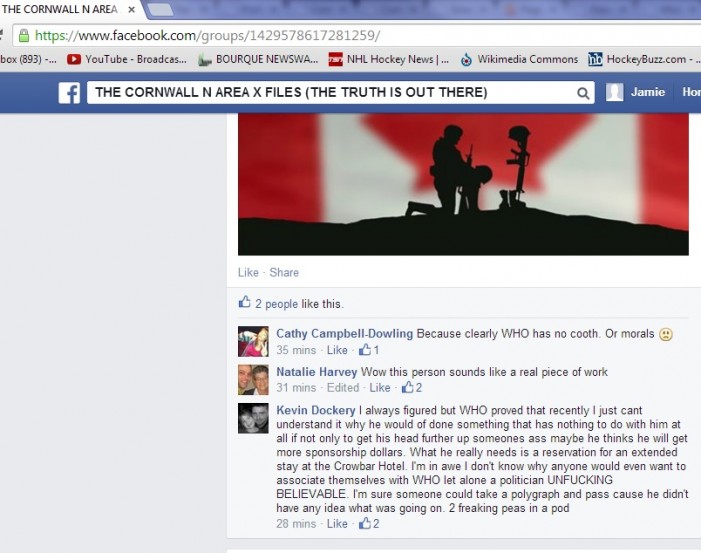 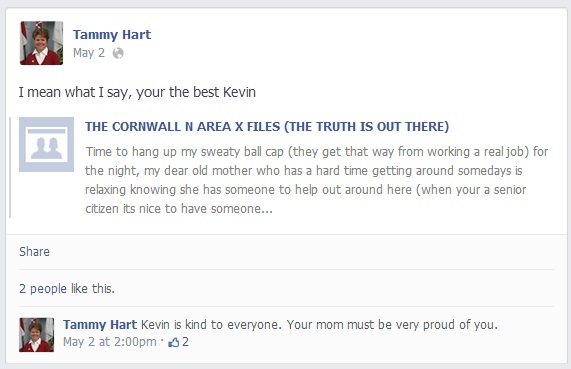 CORNWALL Ontario – Is South Stormont Mayor Deputy Mayor playing dirty pool politically?    South Stormont may be asking for Air Miles from the Integrity Commissioner  as she’s under fire again; but is something far more sinister brewing in the background?

Since she was publicly chastised and humiliated by Integrity Commissioner Robert Swayze this past winter she seems to be becoming desperate in her attacks including against yours truly and  The South Stormont News.

Is this all about the upcoming election and is she crossing lines out of her desperation; especially now that the much more popular councilor Cindy Woods has announced that she will be running against Tammy in 2014?

The two have tangled before with Ms Woods not being shy about Ms Hart’s antics and erratic and some would say ill behavior.

After The South Stormont News presented to Council asking to have the township purchase advertising in the new newspaper Ms Hart submitted a memo to a hate group on facebook that she considers “News”.    The memo stated that South Stormont News was asking for loans and start up funds; essentially lying about the publication, and a wave of gossip ensued that has made it difficult to build the business.

That led to a statement from her council that was published in area media.

An Open Letter to the Taxpayers of South Stormont

Four members of Council have decided collectively to take this unprecedented step to inform our taxpayers on an issue that has discredited the integrity of four members of your elected Council and Township staff.

There has been a suggestion by the Deputy Mayor that in Council’s deliberation for the 2014 budget, preference was given to support a newspaper attempting to establish itself in South Stormont, namely, the South Stormont News.

“Nothing could be further from the truth.”

Therefore we wish to explain and clarify the misinformation being circulated by Deputy Mayor Tammy Hart, the “Open Memorandum” in regards to the “South Stormont News”.

In December 2013, a presentation was made to Council to introduce a newspaper with a local flavour specifically for the residents of South Stormont. The South Stormont News requested the Township consider advertising in this new publication on a monthly basis, much like the Township does in another local newspaper. Council was is favour of the project in principal, however, a review of marketing initiatives would take place as part of 2014 budget deliberations.

The issue of increased advertising came before two budget meetings. Discussion ensued with members expressing concern questioning the need for more advertising however, as a growing community with an increasing need for communication with our residents through multiple media avenues, an increase was approved.

Two (2) proposals for newspaper advertising were presented at the January 21, 2014 budget meeting and a report was prepared by staff for Council to consider. The discussion centered very much about the value and need for further promotion of South Stormont, programs, activities and opportunities. Council agreed to advertise in both newnewspapers.

We are taken aback to think a member of Council would mislead the residents of South Stormont in this fashion. This attempt to discredit the reputations of your elected officials and total breach of trust against fellow members of Council is disgraceful.

We trust this open letter has provided the rationale employed by your Township for the betterment of our communication in our community.

She and a few followers coagulate around this one facebook group, and from that has stemmed some bizarre and what many consider illegal harassment,  cyber bullying, and totally false statements.   In fact she and two members have already been served legal papers to which she has not responded yet.

Last week the Standard Freeholder printed a political smear against Mayor Bryan McGillis.  Several statements of fact were made which didn’t sound remarkably possible; especially as it was an 80 year old Veteran making the claim.

As I went to sit down with my fellow friends to enjoy a good breakfast I was approached by South Stormont Township Mayor Bryan McGillis. He rudely interrupted me, using profane language, claiming I have something against him. This went on for about five minutes. …I am an 80-year-old war veteran and retired Domtar employee, who admittedly wants change in our township.

CFN interviewed Mr. Stewart and many of the statements of facts as written in the letter clearly weren’t true including that Mr. Stewart admitted that he himself did not write the letter and had ” a friend” help him, especially as many, including yours truly had heard about the event after it happened.  The LTE came out two weeks after.

Was that friend Deputy Mayor Hart?    After we released our story I was notified by a person who heard Mr. Currier bragging that he had escorted Mr. Stewart to Police to swear out a complaint against  me stating that I had called and harassed Mr. Stewart.

The police did not do anything as they recently had the Deputy Mayor herself pull the exact same stunt; trying to lay a complaint stating that I had somehow threatened her?  That also didn’t result in a charge, but surely a reasonable person can see a pattern emerging?

Clearly from this excerpt, I as usual, was polite during the interview.   Mr. Stewart admitted that at the event where his alleged event took place that he sat down  right after with…..Richard Currier and Tammy Hart.  So WHO engineered or conspired to manipulate the 80 year old Mr. Stewart to file a complaint?  We know Mr. Currier escorted him, but did Ms Hart participate in the plan?

Witnesses at the event also claim that it was Mr. Stewart that made derogatory comments about Mayor McGillis and that the Mayor simply asked Mr. Stewart if he had an issue which Mr. Stewart in his letter clearly stated he did; or Ms Hart did if she in fact typed out the letter for him?

Mr. Currier’s bizarre angry attacks against SSN, myself, and the Mayor himself is apparent.  Likewise he insists on regurgitating the info in Ms Hart’s memo which clearly falsely stated that we had asked for “start up monies” or a “loan” which all documents clearly show we didn’t?

And only yesterday Ms Hart praised the gentleman whose facebook group was taken down for the use of anti semitic hate symbols and harassment.  The current group was formed the next day. She claims that he is an honest man, the best, and an honour to to know him; that he contribute’s to society and actually cares; yet he is also someone who was charged with a DUI, and then for driving without a license, without plates, and still owes thousands of dollars for unpaid fines?

Yet even after our report that clearly contradicted Mr. Stewart’s letter, which Mr. Stewart admitted he did not write, this “honest guy”  posted on facebook along with another clear Hart supporter more falsehoods. Crowbar Hotel?   This is WHO Ms Hart considers Honorable, and all those wonderful things.

You can’t make stuff like this up, really?  It’s wacky!    We have also had a client from South Stormont News pull their ad after complaining of being harassed.      Yes, there are courts for some of these issues, but it’s a costly process, and of even more concern a timely one.  By the time you have your day in court not only has the initial damage of lying and gossiping been done, but it’s spread via Social Media and the like.

What does Ms Hart have against business in South Stormont?  She also was against the Pellet Plant and new Ingleside Medical Clinic when she was opposed to the wishes of the investors (and all the other councilors)  and was demanding a tender process that could have led to not only a non-local firm doing the work, but one from her self-hated Quebec?

Ms Hart did not respond to email queries for this story.

The question is what the voters of South Stormont think and how they will vote in October?

Dirty Politics? Did Tammy Hart Write the Freeholder Letter to the Editor For Mr. Stewart? by Jamie Gilcig added by admin on May 3, 2014
View all posts by admin →

6 Responses to "Dirty Politics? Did Tammy Hart Write the Freeholder Letter to the Editor For Mr. Stewart? by Jamie Gilcig"