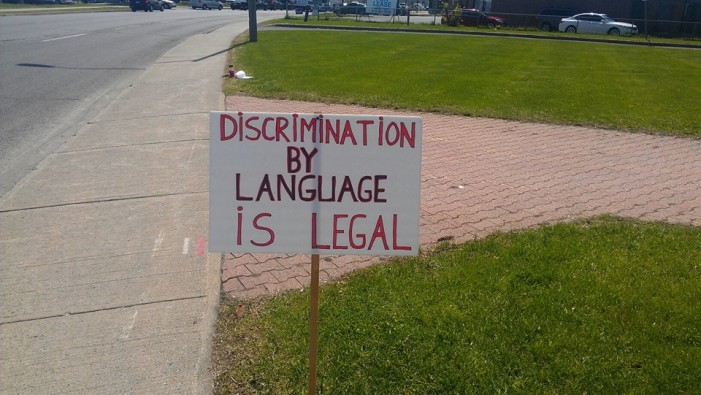 CORNWALL Ontario – Nurse Christopher Cameron if anything is a very determined person. He has been protesting in front of the Eastern Ontario Health Unit which allegedly only hires bilingual staff in spite of Ontario not being a bilingual province and the vast majority of the city being English speakers.

When I attended to interview Mr. Cameron I asked the EOHU to speak to Dr. Paul or anyone.   After twenty minutes wait I was told that nobody would be available and a statement would be emailed to me, which it wasn’t. I also visited MPP Jim McDonell’s office next door to the EOHU.  The MPP was not present, but Eric Duncan, campaign Guru, Warden of the Counties, and Mayor of North Dundas was.  Sadly he hid behind the walk in cooler in the back room refusing to speak to me which was most bewildering…

Mr. Cameron did state that Eric brought him a hot dog while they had their office opening the day before.

One of the most frustrating things that Mr. Cameron and his supporters have expressed is that not one of the three main parties or candidates have publicly supported his cause.  He stated that in Ontario it’s not against the law to discriminate against language.

Many of the staff at the EOHU speak with very thick and sometimes hard to understand French accents.  As well many of those working in Cornwall have Quebec license plates on their cars.   Is there are shortage of health care staff in Ontario that we have to reach out to our neighbors in Quebec?

Mr. Cameron’s wife, Deborah, after having difficulty in gaining promotion locally, now has advanced to a management position working at an upstate NY hospital.

While nobody is suggesting that service not be offered in French at hospitals in Ontario does it have to be at the expense of long term non bilingual staff?   Do all staff have to pass high level proficiency testing or is the basic ability to communicate enough?

And the irony is if it’s so important to force nurses or staff to be bilingual why not Doctors?  Surely if it’s not urgent enough for Doctors to be bilingual it’s a bit farcical to force it on morgue attendants?

EOHU Refuses to Comment on Forced Bilingual Protester Nurse Chris Cameron in Cornwall Ontario added by admin on May 14, 2014
View all posts by admin →