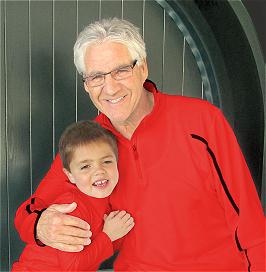 Jesse’s Journey is excited to announce that Grandpa Bob’s 4,000 Kilometre Walk for Louie is underway. Grandpa Bob, or Bob Facca, started walking May 12 in Quebec City, for his grandson Louie and all the other boys with Duchenne muscular dystrophy. More than $400,000 has already been raised.

Grandpa Bob will walk from May until December, starting in Quebec City and finishing in Winnipeg, 4,000 kilometres later. He will be covering approximately 20 kilometres a day and stop in many cities and towns (see attached list). While Grandpa Bob walks through Quebec, he will be joined by Tom Cappelli, who son Aidan suffers from Duchenne muscular dystrophy.

In May of 2012, Grandpa Bob walked 500 kilometres across Ontario and raised $250,000 for Duchenne research. He says he has been training hard and says this is something he has to do, “because as close as the researchers are, they still need more money. The more funding they have, the more research they can do.”

Jesse’s Journey Stops in Cornwall June 2, 2014 DUCHENNE MUSCULAR DYSTROPHY added by admin on May 26, 2014
View all posts by admin →