Are Canadian Soldiers Being Jailed Over PTSD & Mental Health Issues? – Letter to the Editor – June 17, 2014 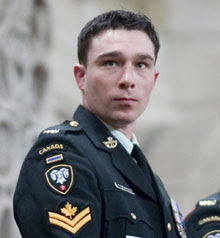 Letter to the editor:

It seems as though everyone who works for the Ontario Ministry of Justice, including crown attorneys, judges, prison guards and provincial police officers may conduct their duties without being held accountable for the actions or inactions?
A very close friend of mine, decorated veteran Sgt Collin Fitzgerald has been wrongfully accused and held in custody at the OCDC.  The OPP and swat team descended upon his parents house on Friday 6th of June with more firepower than what was used when UN forces killed Osama Bin Laden.
While in custody at OCDC  (Ottawa Carleton Detention Centre) Sgt Fitzgerald has not been receiving his PTSD medication as prescribed by his doctor.  Instead the staff has been dissolving his time-release medication in water, along with the other meds he is prescribed and told to consume it all at once in the form of a cocktail.  This induces vomiting.   When Sgt Fitzgerald refused to take his medication in that fashion, he was threatened with additional criminal charges for non-compliance.
We, and his parents have made several calls to the correctional facility, notorious for it’s human rights violations, with no result.   His doctor has repeatedly faxed over the order, with no change to the situation.  We have personally spoke with OCDC staff who refuse to give their name and eventually hung up on us.  On June 12th, at a hearing in Cornwall the Judge ordered that Collin be administered as described.  When Collin returned to OCDC that evening he was once again presented with this cocktail.  When he protested, he was refused his meds altogether.   For sufferers’ of PTSD these medications are a matter of life and death.
Having spoke with Sgt Fitzgerald’s attorney, a public defender because he is now bankrupt due to legal fees, we were advised to contact our local members of parliament.  Both Guy Lauzon’s office and Jim MacDonell’s office assured me that they will do whatever they can to rectify the situation for Collin.
The big question is “who is policing the police, crown attorney’s , judges, and prison guards?”… the answer, is simple… NO ONE!  I can only image what this must be like for the incarcerated soldiers suffering from PTSD and not receiving their meds.  Before this incident Collin was living at his parent’s home, with regular access to his child… He was back to his old self, and moving on with his life.   This treatment by the judicial system employees has set him back… he will now need to return to the PTSD treatment facility if the crown’s office decides to grant him bail.
Sgt Fitzgerald is a victim –  victim of the war he fought on our behalf, and a victim of our province’s corrupt judicial system.
Photo: Submitted
Adam J. Lauzon and Melissa Filion
Cornwall Ontario

18 Responses to "Are Canadian Soldiers Being Jailed Over PTSD & Mental Health Issues? – Letter to the Editor – June 17, 2014"