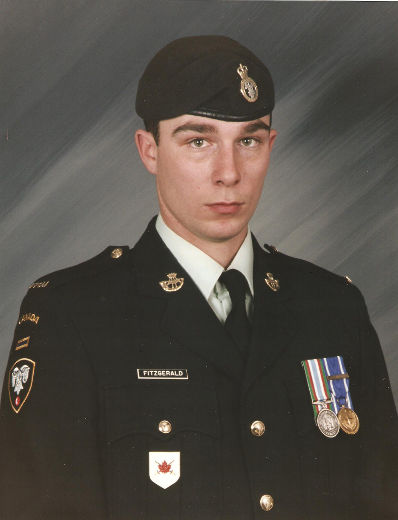 Wedding Anniversary  as their son, former Princess Patricia Light Infantry Man Master Corporal Collin Fitzgerald was released on bail after a two day hearing and will be with them to help celebrate.

Collin stood in the box for the second day of the hearing and listened to Justice of the Peace Herb Kreling work through the extensive list of charges and conditions.

Assistant Crown attorney Katie Clarey had one additional request; but Mr. Fitzgerald was reunited with his parents within an hour and met by Friends of Vets supporters and media outside the courthourse.

Fitzgerald had been charged with intimidating an OPP officer two weeks ago, and was held at the Ottawa Carleton Detention Centre which led Mr. Fitzgerald to suggest that the Taliban prisoners had been treated better in Afghanistan than he’d been treated.

It was alleged that the prison was not administering his medication, as he suffers from PTSD, as prescribed.

His parents, friend Adam Lauzon, and Friends of Vets supporters were in tears as the strict bail was granted.

Lauzon was an air cadet with Collin before he joined the Glens here in Cornwall (none of whom showed up for either day of the hearing) and eventually joined the Princess Pats.   One of the most emotional moments was Thursday when  Lauzon and some of the Friends of Vets and Legion members saluted Fitzgerald when he entered the court room.

Lawyer Gaye Leroux  jumped to Mr. Fitzgerald’s defense when he became aware of the case at the court house.

Mr. Leroux himself was a police officer for twenty years and is no stranger to PTSD himself.

Collin said he couldn’t wait to see his daughter after walking out of the courthouse.    While today may have been a brief victory he faces a daunting next step as he has to work through the legal system as he faces his outstanding charges and treatment for his condition.

No Canadian Soldier should be treated with anything other than respect for what they put on the line while on duty.   Ultimately when the lives of our Armed Forces are impacted we owe it to them to help as best we can in Canada.

Mr. Fitzgerald jumped into a burning vehicle under fire which led to him being awarded the Medal of Military Valour by the Governor General.

Mr. Fitzgerald is lucky to have the support of his family and supporters; but how many Collin Fitzgerald’s don’t have that support?

Do we leave them on the streets or in jail cells?