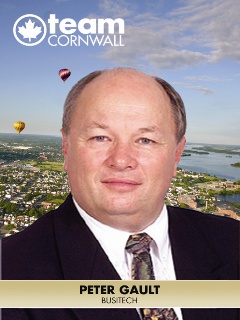 Bob Kilger: Gilles Latour is a long-time personal friend and my thoughts are with him and his family at this time.

CORNWALL Ontario – Former Team Cornwall Prez Gilles Latour was arrested in his office after a five month investigation by Corwall Police Services, but very little information is being made available which is raising many questions.

Mayor Bob Kilger near instantly offered the  quote in the Seaway News below the photo above.

Mayor Kilger’s relationship with jailbird Willie Wise, a former city councilor who was Mayor Kilger’s “Boss” while he was coaching minor league hockey in Cornwall was also very “Friendly”.

Mr. Latour, a high school drop out,  was bag man for the last Kilger election and is alleged to have told at least one city business that they’d receive city business if they donated to Kilger’s campaign.    The business further alleged that it in fact did receive business and used that as a reason when they cancelled their ad in CFN citing pressure from the Kilger camp and fear of losing city dollars. Team Cornwall’s new prez, Peter Gault also had a near instant quote in the same story.

Peter Gault, who succeeded Latour as head of Team Cornwall not long ago, said the group has conducted a review of its books.

“Everything is in order,” he said. “We went back over a number of years.

“I can tell you he is the past chair, and I am the chair now.

“(The police charges) came as a total surprise.”

If the police charges were a total surprise how could several years of forensics be done on accounts in such a short time, especially as Mr. Latour was arrested in the afternoon?

Two websites specializing in consumer complaints  make grave allegations against Mr. Latour as well.   These are from an anonymous source and have not been proven; but raise a few other flags.

He would go on and on about how he is best friends with the Mayor of Corwall (Bob Kilger) and past and present NHL hockey players like Scott Pearson, Police Officers as well as other well known business people. He likes to be seen and associate himself with these people in order to use their names when doing business and strealing from you. Gilles Latour is extremely smooth and puts on a great show. I lost my entire life savings to this lying scumbag as I believed him and his lies. I should have known his return on investment was to good to be true and that his name dropping was way to thick.

When I confronted him about his lies and false promises, he made it very clear to me that he has many friends in high places including the mayor of Cornwall (Mr. Bob Kilger), past NHL hockey players, local business people and Police Officers that would make life very difficult for me in Cornwall if he chose to do so.

Clearly Mayor Kilger has identified himself as a “Friend” of Mr. Latour’s.    He is on the police board and his campaign manager Pat Finucan is its chair.

CFN confirmed today that the Cornwall Police Service was the sole force investigating the allegations against Mr. Latour, and that the investigation is focused solely on the two complaints involving the charges and not any possible other issues.

Surely an outside agency should be participating in this investigation, and outside crown and Justice’s be used?

The biggest question after talking with several city insiders is whether Mr. Latour himself knew about the investigation and was it a factor in his stepping down as President of Team Cornwall?

Mr. Latour and Mr. Gault did not respond to CFN calls before publication.

What do you think CFN viewers?  You can post your comments below, and we will be following with updates as more information becomes available.  You can also contact us at info@cornwallfreenews.com or 855 444 1133 if you have more information related to this story.

Gilles Latour Investigation More Questions Than Answers – Is He the Next William Wise? by Jamie Gilcig added by admin on August 20, 2014
View all posts by admin →

21 Responses to "Gilles Latour Investigation More Questions Than Answers – Is He the Next William Wise? by Jamie Gilcig"