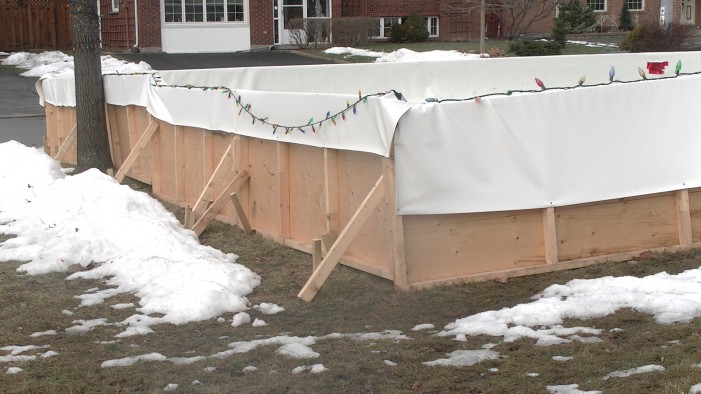 CORNWALL Ontario – It wasn’t a huge crowd, but they were very spirited.  The kids had a good time and even some of the neighbors were dancing as an area DJ provided some tunes.

The big news today is the allegation that the complaint to shut down the Vincent’s rink was engineered by former City Councilor Glen Grant.

Apparently the complainers had asked Grant for help and it was Grant that expedited the complaint and pushed the by law department for the resolution chosen.  The city like most, gets several complaints.  Many never see the light of day as they are frivolous, like this one, some get inspected, but it’s rare for a complaint to come in and be resolved as quickly as this one allegedly did.

Is it an issue of the VIP getting serviced by an old friend? Are eight or so small stakes really worth destroying a family rink over in 2014?

The family is upset as they are refusing to take the rink down, but are upset that they are either working or at school on January 5th and fear that they will come home to a destroyed rink.

Ken Merpaw and Stephanie Carriere organized the Rally.   Candidate Rolly Besner was in attendance and pointed out that if we’re allowed to plant trees a few pegs should not be an issue.

Several councilors spoken with by CFN today were concerned about the Glen Grant issue and suggested that perhaps a stop order should be given to the by law officer until an investigation could be resolved.

Mr. Grant did not respond to our request for a response as of press time.

This would not be the first time that Mr. Grant greased a decision at City Hall. He’s alleged to have pushed hard for his friend Brendan Wells daughter to get a job with the city. (she eventually was hired)

What do you think dear CFN viewers?  Can the rink be saved?  Will the City investigate whether this was a VIP complaint handled differently than normal complaints?  You can post your comments below.

Glen Grant Fingered For VIP Complaint Treatment to Kill the Vincent’s Ice Rink in Cornwall Ontario by Jamie Gilcig – 26/12/14 added by admin on December 26, 2014
View all posts by admin →