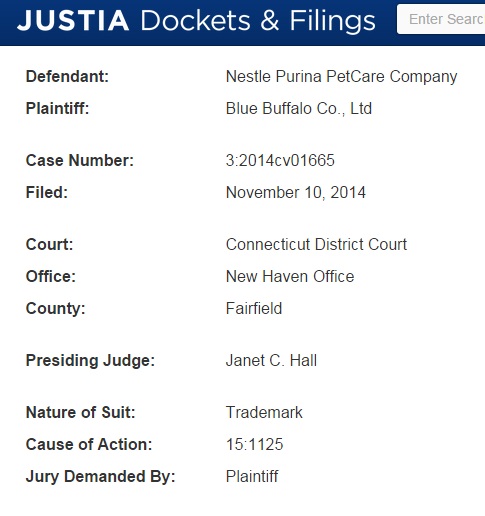 CFN – It’s Goliath trying to litigate David to death as $20 Billion dollar per year Nestle/Purina is suing Blue Buffalo claiming the Pet food maker is doing a shuck and jive over ingredients.

Blue Buffalo founder Bill Bishop  fired back with a notice himself.

This is to inform you of a recent, and highly relevant, development in our legal proceedings with the Nestle Purina Company. As some of you will recall from my previous letters, Nestle Purina, part of the $200 billion global food giant, sued Blue Buffalo on May 6th, claiming “Independent testing shows that Blue Buffalo is not being honest about its ingredients”. The very same day they started a highly sophisticated, multi-million dollar campaign on the Internet designed to damage Blue Buffalo’s reputation. This smear campaign, like their lawsuit, was based entirely on the findings of Nestle Purina’s so called “independent testing”. They promoted their mysterious test as having been performed by a highly sophisticated, independent lab, while refusing to disclose what it was and who had conducted it.

At that time I assured you that Blue Buffalo had never been dishonest about its ingredients. Our formulas never included the chicken by-product meal, corn or artificial preservatives that Nestle Purina claims to have found in our products and we never purchased even one ounce of those ingredients.

Given Nestle Purina’s total reliance on their “independent testing” as support for both their lawsuit and smear campaign, a reasonable person would have expected them to make a complete disclosure to the public of their testing procedure and protocols at the time they accused us of lying about our ingredients. Instead they took the opposite approach, and played legal games to keep their supposed scientific proof hidden from the public despite continuing to use it as “proof“ for their defamation of Blue Buffalo.

Now, after over four months of stonewalling, we made a motion in Court to force Nestle Purina to remove the veil of secrecy over their testing and have succeeded in making it public. While Nestle Purina is pretending like they’re disclosing it voluntarily, they fought our efforts to make their testing public for months. It’s now very clear why they fought so vigorously to keep it secret as it does not even come close to meeting the basic requirements of a scientific test, let alone being something to use as support to make their outrageous, malicious allegations. It turns out that what the $200 billion mega international corporation promoted as a highly sophisticated, independent lab was in reality an individual with dubious scientific credentials who works out of a lab in his home. His analysis was performed with a rudimentary microscope under less than optimal conditions with questionable methods and record keeping. All things considered, a very odd choice for a company with unlimited financial resources. Perhaps more respected organizations turned them down?

I invite you to read a critique of Nestle Purina’s “independent research” by a true leading expert in the field with a PhD in Materials Science and Engineering who advises both the FDA and the National Science Foundation.….simply click on the link below to access his report. After reading it, I think it will be crystal clear to any fair minded individual that Nestle Purina’s attack on Blue Buffalo’s honesty has absolutely no basis in fact. It’s simply a poorly disguised advertising campaign intended to harm a competitor whose ingredients are preferred by knowledgeable pet parents.

Knowing how weak their supposed scientific proof is, in order to continue to muddy the waters, Nestle Purina continues to try to salvage its case with new and unfounded allegations. We will continue to fight them in Court and respond accordingly.

My sincere thanks to all you pet parents who have continued to support us in the face of Nestle Purina’s unfounded assault on our Company’s integrity. We appreciate you more than you can imagine.

Wishing you and your pets the best.

The link includes a shoot down of the science used by Nestle to assert their claim.

Blue Buffalo food deck does not include by-products, corn or wheat, cheaper ingredients used by many food companies including Purina.    While chicken by-products can be healthy organ meats like liver and gizzards, they also can be feathers and other less desirable content.

The pet food industry is generally run by larger food companies.  Many of these spin off human grade food waste to their pet food subsidiaries.  Nestle owns Purina.  Mars owns Royal Canin for example as well as other brands.  Many of these cartels brand some foods for grocery sale and some for pet specialty.

In the last generation new advances in Pet food science and more human awareness of what we consume has led to more concern for what our pets eat, especially with the high cost of vet bills.  Ironically vets rarely get much nutritional training and much of that is conducted by pet food companies such as Hills.

These advances have also led to smaller independent food companies biting into bigger ones profits as prices climb the ladder.

At issue are claims made by Purina that Blue Buffalo states one ingredient list on its package, but they claim analysis shows otherwise.   They may not win the lawsuit, but of course bad news always travels faster than good news leaving Blue Buffalo with a pile of by-products.

Blue Buffalo did admit that some of its chicken supply may have contained chicken by products from a supplier, IE Supplier error.  Purina shot back a letter of their own in October.

BLUE BUFFALO FINALLY ADMITS ITS PRODUCTS MAY BE MISLABELED

ST. LOUIS, MO, October 15, 2014 – Last night, Blue Buffalo publicly revealed facts that prove the central allegations in our false advertising lawsuit against them. Contrary to prior assurances, for the first time Blue Buffalo has had to admit that ingredients from at least one of their suppliers contain poultry by-product meal. Click here for link. This is despite the fact that Blue Buffalo has repeatedly stated – in their TV commercials, their advertising, and to consumers on their website – that they never use this ingredient.

Blue Buffalo admits this is “unacceptable” and it is, but Blue Buffalo is not being as “transparent” as they claim. Remarkably, it was Purina – not Blue Buffalo – that unearthed the truth through its scientific testing and, more recently, from documents it obtained through the legal process from one of Blue Buffalo’s ingredient suppliers. Without Purina’s filing of this lawsuit, the truth would still be untold. Blue Buffalo’s approach since May was to deny everything – until Blue Buffalo was forced to admit it was wrong. Changing your story only after the facts are revealed is not transparency.

What is the real truth here? Blue’s Chairman, Bill Bishop, repeatedly told their pet parents, “I can assure you that we’ve never purchased one kernel of corn or one ounce of poultry by-product meal.” Why isn’t Blue Buffalo telling pet parents now that Wilbur Ellis is the same supplier that Bill Bishop blamed for ingredient problems in years past? Click here for link.

Why does Blue Buffalo always have someone else to blame? Remember Blue Buffalo’s angry protests, their countersuit against Purina, their charges of a “smear campaign,” their claims of “voodoo science”? Those are tactics, not truth.

At Purina, we have not used the Texas plant of Wilbur Ellis, formerly known as American By-Products, Inc., in several years. This plant was unable to meet the strict quality control standards we have in place for all of our vendors.

Blue Buffalo owes consumers an apology for all the false statements, false labels, and false advertising. More than this, it is time for Blue Buffalo to be honest with the public and the “pet parents” they profess to care so much about. A half-admission that Blue Buffalo products ‘may’ contain undeclared by-products is simply not acceptable. Pet owners deserve to know what’s truly in Blue Buffalo pet food. Blue Buffalo is alleged to also have spent $50M on an ad campaign claiming to be better than foods including Purina.

The pet food industry is worth over $20B per year to food manufacturers.  Companies like Blue Buffalo had a big boost after a wave of pet illness and deaths occurred in 2007 after some hinky ingredients from China were found to be in several pet foods.