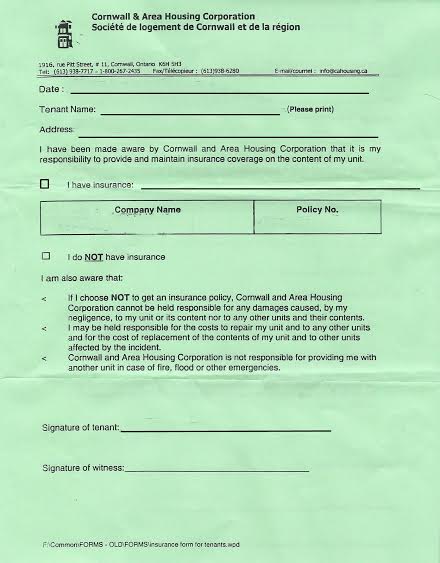 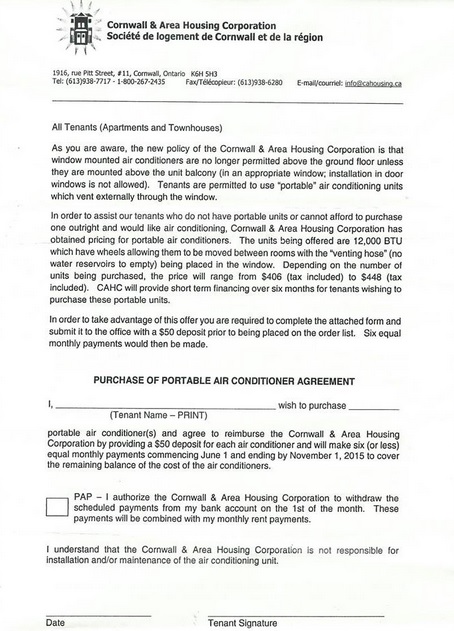 CORNWALL Ontario –   As many regular CFN viewers know, we don’t just cover the news, but we become active in a story and have been known to advocate for our community.

I was alarmed and disturbed to hear from several residents of Cornwall Housing units who have been threatened with termination of their leases over the new Air Conditioning policy.

Any window units placed above the ground floor are now in violation.

Peggy Fulton from Cornwall Housing spoke with CFN citing two incidents of units falling from windows, but all residents are forced to purchase renters insurance which usually includes at least $1,000,000 in liability coverage.

The tenants also pay their own electricity.   The are being offered zero interest financing for six months to cover the purchase of portable units, but these run for nearly four times the cost of your standard window unit.  Families have as many as three or four units.   One resident shared that they bought two of the portable units, but when both were on their breakers would flip off.

Could Cornwall Housing’s board forget the financial demographics of their clients?  Many already own their window units.  Should they really be forced to purchase new ones?

Here is the insurance document from Cornwall Housing. CFN phoned other area housing agencies and in Ottawa for example tenants have to go through a process of asking permission to place an air conditioner in a window, but that is a process and essentially in Ottawa they simply give instructions on the process and include brackets. Here is an interesting piece about units falling in NYC.  It should be noted that NY’s population is a lot larger than Cornwall’s and has many more tall buildings per capita.

For Cornwall to have two units fall in one year is an issue, but this policy is clearly not the answer as we’ve seen days of over 30 degrees C in Cornwall this May alone.   It becomes a health issue, especially for Seniors.

I emailed Ms Fulton with the following:

I am going to officially ask Cornwall Housing to temporarily halt your Air Conditioning Policy for 90 Days starting June 1, 2015.
.
At that point I’d like Cornwall Housing to take feedback from its residents and the community at large regarding your policy which many find punitive and a health concern, especially for seniors.
.
If you don’t want properly installed air conditioning units then it is up to Cornwall Housing to provide reasonable alternatives.  We’re talking about seniors and some of the weakest people in our society.  The stress alone that many are feeling now is not acceptable.
.
In our chat this morning you mentioned financing, but frankly those on fixed incomes don’t have a spare $500, $1,000, or more if they need multiple units, even with zero financing.
.
I would also like to make a presentation to your board next week on behalf  of some of the residents and community on why this absurd policy which doesn’t exist in Kingston or Ottawa nearby needs to be revised before someone gets sick or dies.
.
Thank you,
.
Jamie Gilcig

The board of Cornwall Housing meets next Thursday.  In the meanwhile you can contact the three city councilors that sit on its board, Elaine MacDonald, Carilyne Hebert, and Brock Frost.    Ms Hebert and Ms MacDonald have not responded to email query.  (Mr. Frost has asked Cornwall Police to keep me from contacting him with valid questions about issues such as this.  Rather than fight with our officers of the law I am just going to share this so poor Brock can’t say he wasn’t asked. )

Some common sense solutions would be for AC units to be inspected to ensure proper installation.

If Cornwall Housing feels $1M liability isn’t enough in Ontario then perhaps a group rider or group insurance policy that tenants that wish to have AC units could pay a fee for spread out over the renters?

Hopefully the board will embrace the need to focus on overall safety.  Far more people die of dehydration and effects of heat each and every year than by falling air conditioners.

What do you think dear CFN viewers?  Is this freaking nuts or what?  You can post your comments below and please sign our petition.

Our Petition module is having an issue and not displaying signatures. We are resolving to solve this problem.  Please sign as they are being recorded in the database.  We apologize for any confusion.

Residents Heated Up as Cornwall Housing Nixes Window Air Conditioners MAY 21, 2015 added by admin on May 21, 2015
View all posts by admin →

29 Responses to "Residents Heated Up as Cornwall Housing Nixes Window Air Conditioners MAY 21, 2015"