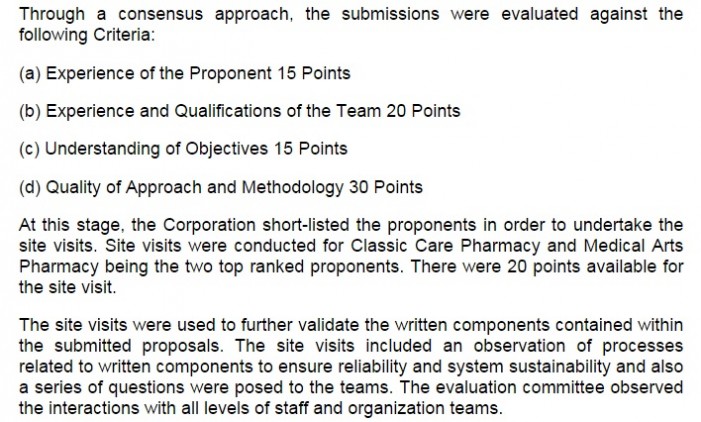 The buck stops at the Mayor as he is the leader.   Council dictates policy which in a perfect world is enacted by management.   Then again sometimes management dictates to a weak and ignorant council lacking vision, leadership, and direction.

For the second term in a row Council has given the contract for Pharmacy services at its Long Term Care facility, Glen Stor Dun Lodge to a service provider that is not based in Cornwall nor has many local employees.  In other words, over a half million dollars is pumped out of the community instead of into the community.

The cost to the city either way?  Pretty much zero as the province writes the cheques and residents may in fact have to pay higher costs for services and products not covered by the province.

Medical Arts Pharmacy is a locally owned firm that has facilities and services most pharmacies do not.    It has been a long standing family firm that is one of, if not, the largest non government employers in the community with many of the positions, including one held by the mayor’s own daughter, paying well compared to other local gigs.

Does any of that make any sense?   While a promotional video, much of the ground covered is very relative to the service offered by a local company via a distant one with no real local presence.

UPDATED
We’re adding some info from the city document that will be presented to council for approval at the September 14th meeting. As you can see there is no factor for local impact to the economy and community.

We now know who should be held accountable and responsible for the decision which was also approved by the CAO Norm Levac.
Medical Arts also was hit on by almost every charity for support over the years.  Agape’s orchard?  That had a large contribution from Medical Arts, Senior’s Hockey, Safe Grad, EMS, Year Book Ads, and a very long list historically.
.
Can they keep investing in equipment, services, grow jobs and contribute as much to the community when this sort of decision is made?  What does the company awarded the RFP actually contribute to the Community?
.
When it comes to value does it make sense to award a contract to a company that sends in a pharmacist from out of town to service residents or have a full service local facility?
.

The contract was given to the outside company under the Paul Fitzpatrick Donna Derouchie scandal.  Does it make sense to have renewed?

.
The bigger issue is our local economy.   While all businesses need to be treated fairly, RFP’s and tenders have to reflect a direct value to the community, IE jobs, keeping dollars local.
.
It also sends a message at best that this council doesn’t care about local business which is already under extreme pressure while taxes are going up, and at worst leads to gossip and innuendo about how some services are being awarded and why.
.

What do you think dear CFN viewers?   Should the city be giving more credence to the local impact of contracts awarded?