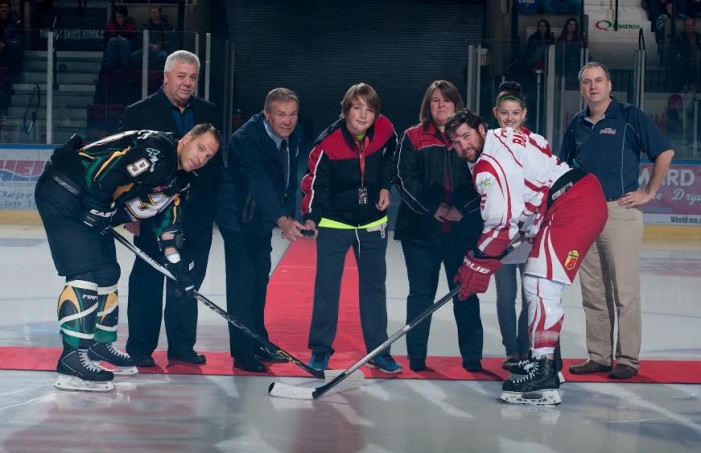 The River Kings couldn’t get any puck luck on Saturday night at the Civic Complex in the team’s home opener. Cornwall dropped a 4-2 contest to the visiting Riviere-du-Loup 3L in front of 934 fans.

Francis Tudel pounced on a rebound for powerplay marker 1:24 into the third period for the eventual game-winning goal.

Guillaume Decelles was solid in goal for the 3L, making 25 stops to earn the victory. He also had some help from his posts – the River Kings hit three of them in the first 30 minutes of the contest.

After Tudel’s powerplay marker, which came just as a 5-on-3 powerplay had expired, Pierre-Luc Faubert brought the Kings to within a goal at 9:58 of the third. With a delayed penalty coming to the 3L, Faubert beat a sprawling Decelles.

Sylvain Deschatelets’ empty-net goal with seven seconds to play in the game sealed it for the 3L.

Pete Karvouniaris took the loss in goal for Cornwall despite a 40-save performance.

Curtis Tidball tried to spark the River Kings late in the first, dropping the mitts with Dave Hamel. Later, newly acquired River Kings defenceman Frederick Cote took exception to a slash from Deschatelets and dropped the gloves with the 3L captain mid-way through the third.

FRIDAY: On Friday night, Eric Bertrand had two goals and two assists to lead the Cool FM de St-Georges to an 8-1 thumping over the River Kings. Francois Ouimet had the lone marker for Cornwall, while Jeremy Vigneault-Belanger chipped in five assists for the Cool FM. Pier-Olivier Pelletier was solid in goal, turning aside 29 shots to earn the victory for St-Georges.

NEXT WEEKEND: Cornwall travels to Thetford next Friday to take on the Assurancia. On Saturday, Oct. 17, the River Kings the Sorel-Tracy Eperviers. Puck drops at 7:30 p.m.