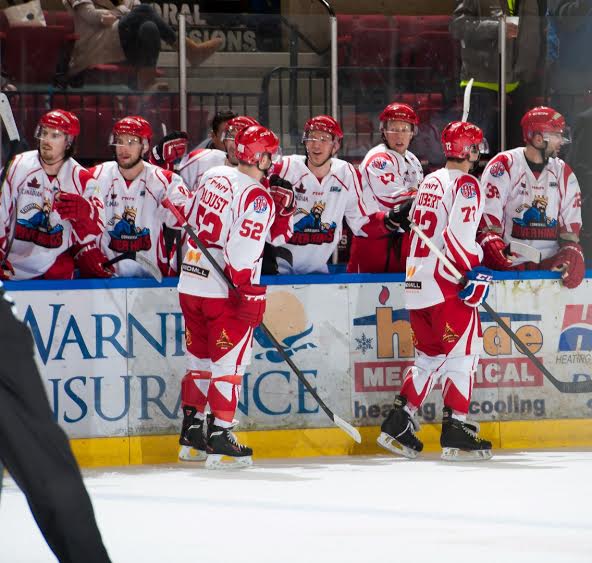 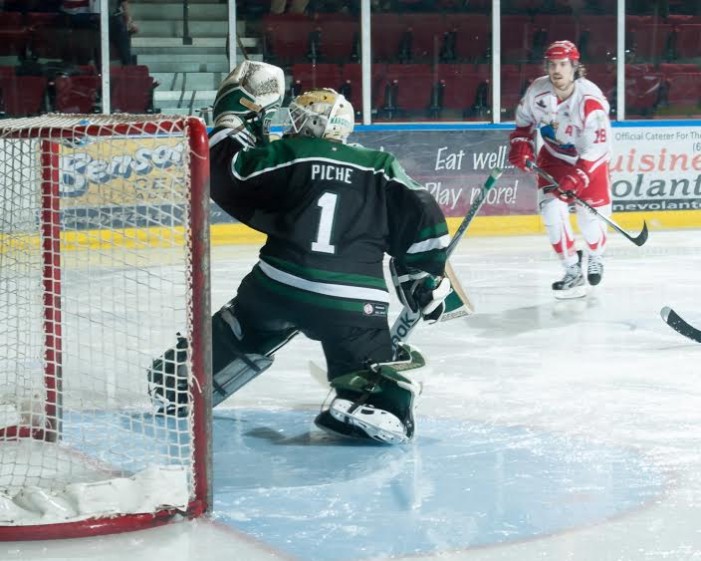 CORNWALL Ontario – The River Kings stunned the first-place Jonquiere Marquis with a 5-3 come-from-behind victory on Saturday night at the Civic Complex in front of 792 fans.

Jonquiere jumped out to a 3-0 lead in the opening 20 minutes on goals by Jeremie Malouin, Mathieu Brunelle and Hugo Carpentier. The Marquis outshot the River Kings 17-11 in the first.

But Cornwall was a different team the rest of the way.

First, at 6:40 of the middle frame, J.P. Caron pounced on a Danick Malouin shot that bounced off the end boards to beat former River Kings goalie Frederic Piche. Then, veteran Pierre-Luc Faubert cashed in on a Michael Stinziani rebound at 13:38, to bring Cornwall to within a goal.

Stinziani, with a beautiful deke on the powerplay, leveled the score for Cornwall at 8:01 of the third.

Nicolas Larocque-Marcoux then gave the River Kings a 4-3 lead with 6:44 to play. After a great individual effort by David Croteau, Marcoux buried the rebound to the delight of the River Kings faithful. Francis Ouimet iced the game when he bounced a shot from the neutral zone past a helpless Piche with two minutes to play.

Roch Seguin and injured defenceman Jonathan Jasper were on the bench for the River Kings this weekend as general manager Rick Lalonde continues to search for a new bench boss.

FRIDAY NIGHT: The River Kings fell 4-3 to Riviere-du-Loup on the road. Cornwall trailed 4-1 after 40 minutes but fought back on third-period goals by Larocque-Marcoux and Caron. Chris Kushneriuk, with his first of the season, also scored for Cornwall. Etienne Archambault, Francis Meilleur and Simon Danis-Pepin each had a goal and an assist for the 3L.

NEXT WEEKEND: Next Friday, the River Kings travel to Trois-Rivieres to take on the Blizzard (8 p.m.). Cornwall is back on home ice on Saturday, Dec. 19 as St-Georges pays a visit to the Civic Complex. The puck drops at 7:30 p.m.

TEDDY TOSS: The River Kings annual Teddy Bear Toss will be held next Saturday. Fans are asked to bring a new or gently used Teddy Bear to the game. Bears will be tossed onto the ice after Cornwall’s first goal.