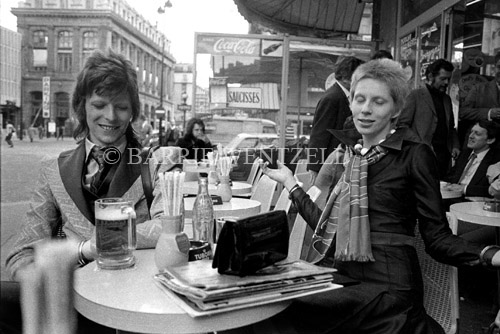 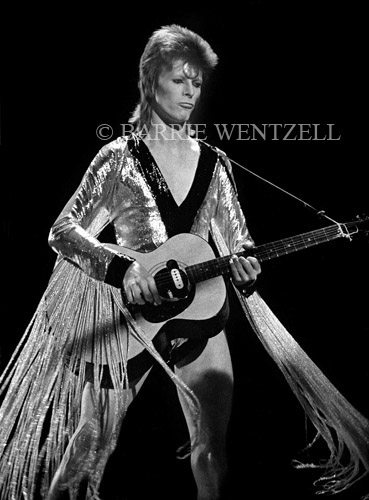 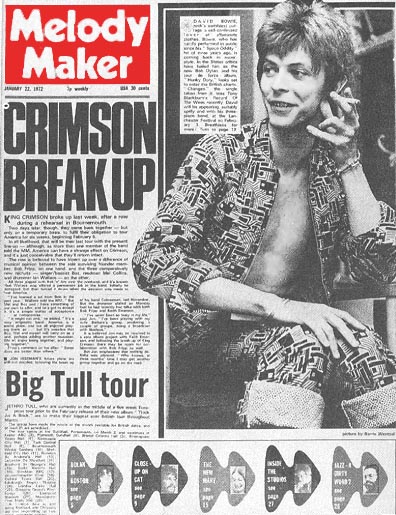 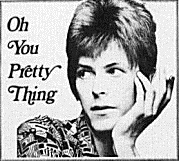 Cornwall Ontario – Barrie Wentzell has met and worked with almost every musical great during his stint with Melody Maker magazine in London from 1965-75.

That time included working with David Bowie who passed away after a brave fight with Cancer.

Wentzell recently visited Cornwall for a fund raising exhibit for its public art gallery and was so supportive that he donated $5,000 worth of his prints for the fund raiser, including a few of David Bowie and joined its board of directors.  (Barrie pictured above on the right with local artist Moise Lasata & Santa Claus!)

I spoke with Barrie who’s retired to Toronto, if you truly can call it retirement as he’s as busy as ever, including work on his new book. He shared how he was present for that fateful interview with Melody Maker when Bowie announced he was gay back in 1972!   His camera worked its magic as Michael Watt handled the words.

David uses words like “verda” and “super” quite a lot. He’s gay, he says. Mmm. A few months back, when he played Hampstead’s Country Club, a small greasy club in North London which has seen all sorts of exciting occasions, about half the gay population of the city turned up to see him in his massive floppy velvet hat, which he twirled around at the end of each number.

According to Stuart Lyon, the club’s manager, a little gay brother sat right up close to the stage throughout the whole evening, absolutely spellbound with admiration.

As it happens, David doesn’t have much time for Gay Liberation, however. That’s a particular movement he doesn’t want to lead. He despises all these tribal qualifications. Flower Power he enjoyed, but it’s individuality that he’s really trying to preserve. The paradox is that he still has what he describes as ‘a good relationship’ with his wife. And his baby son, Zowie. He supposes he’s what people call bisexual.

David’s present image is to come on like a swishy queen, a gorgeously effeminate boy. He’s as camp as a row of tents, with his limp hand and trolling vocabulary. “I’m gay,” he say’s, “and always have been, even when I was David Jones.” But there’s a sly jollity about how he says it, a secret smile at the corners of his mouth. He knows that in these times it’s permissible to act like a male tart, and that to shock and outrage, which pop has always striven to do throughout it’s history, is a balls-breaking process.

And if he’s not an outrage, he is, at the least, an amusement. The expression of his sexual ambivalence establishes a fascinating game: is he, or isn’t he? In a period of conflicting sexual identity he shrewdly exploits the confusion surrounding the male and female roles. “Why aren’t you wearing your girl’s dress today?” I said to him (he has no monopoly on tongue-in-cheek humour). “Oh dear,” he replied, “You must understand that it’s not a woman’s. It’s a man’s dress.”

He began wearing dresses, of whatever gender, two years ago, but he says he had done outrageous things before that were just not accepted by society. It’s just so happened, he remarks, that in the past two years people have loosened up to the fact that there are bisexuals in the world – “and – horrible fact – homosexuals.” He smiles, enjoying his piece of addenda.

“The important fact is that I don’t have to drag up. I want to go on like this for long after the fashion has finished. I’m just a cosmic yob, I suppose. I’ve always worn my own style of clothes. I design them. I designed this.” He broke off to indicate with his arm what he was wearing. “I just don’t like the clothes that you buy in shops. I don’t wear dresses all the time, rather. I change every day.

Barrie talked of his moments with Bowie and what a gentleman he was to work with. “David’s passing is sad.  We’ve lost a lot of characters that I’ve photographed in my pictures, but their images will live forever, like their music.

Barrie, now in his 70’s has seen many of his friends depart for kinder and gentler places.    More articles are being written about his work, and he’s becoming more in demand than usual.

TAG Cornwall, the local art public gallery has a few Wentzell’s of Bowie available for sale, but more can be purchased via www.Barriewentzell.com –    The fund raising exhibit of his work continues through the end of January.