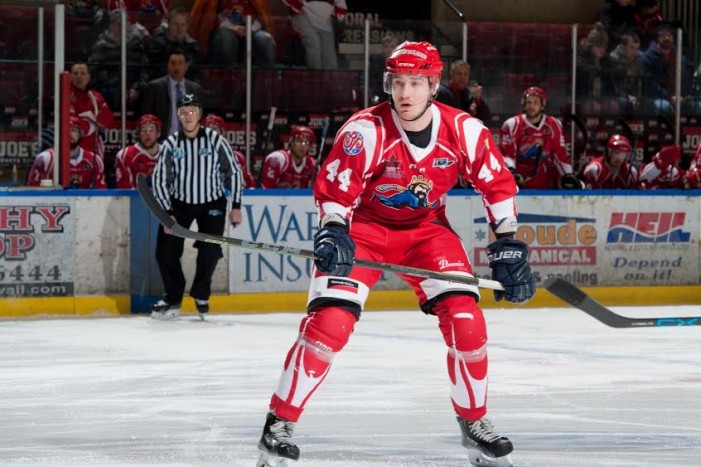 CORNWALL Ontario  – For the second straight Saturday night, River Kings fans were treated to three-on-three overtime at the Civic Complex. This time however, it was the visiting team that came away with the victory as Sorel edged Cornwall 4-3.

The River Kings, who were victorious on Friday night at Laval, picked up three points this weekend, despite the overtime loss in front of a season-high crowd of 1,211.

Alexandre Imbeault was the hero for the Eperviers, with a beautiful deke on a breakaway that beat Pete Karvouniaris 2:16 into the extra frame.

Newly acquired forward Keven Veilleux, playing in his first game on home ice for the River Kings, opened the scoring 5:26 into the game. Using his long reach, Veilleux beat Mathieu Dugas with a backhander.

Marco Charpentier replied for Sorel, with a breakaway goal at 13:44 of the first.

Maxime Charron gave Sorel a 2-1 lead 5:17 into the second when he buried a rebound past a helpless Karvouniaris. Then, with the River Kings on a powerplay, Nicolas Larocque-Marcoux leveled the score with a perfectly placed wrist shot that beat Dugas in the top corner with 5:54 left in the middle frame.

David Croteau gave Cornwall its first lead of the contest with a powerplay goal at 5:55 of the third. Croteau and linemate Nicolas Pard worked the give-and-go perfectly, with Croteau finishing the play for his 8th goal of the season.

But Sorel responded with a powerplay goal of its own with 4:51 to play in the third as Kevin Gadbury buried a loose puck in the crease to send the game to overtime.

Defenceman William Lacasse chipped in a pair of assists for the River Kings, who were outshot 33-28. Cornwall’s Curtis Tidball took on Sorel’s Guillaume Coude in the first period.

Imbeault (first), Croteau (second) and Sorel’s Dominic Leveille, who had two assists, were the announced stars.

WAIVER CLAIMS: Even though the LNAH trade deadline has come and gone, General Manager Rick Lalonde is still shopping. The River Kings have claimed free agents Charles Lachance and Stephen Blunden off waivers. Lachance, 27, is a 6-foot-2, 200 lb. forward who has had pro stops in the ECHL, CHL and SPHL. Blunden, 26, is a 6-foot-2, 195 lb. forward who has played in the CIS and overseas in France.

CORSI: On Friday, Cornwall also signed 25-year-old netminder Charles Corsi, who made his debut at Laval. Corsi played seven games for Trois-Rivieres two seasons ago. The native of Rosemere, QC, has also played overseas in Italy.

FRIDAY: At Laval, defenceman Casey Fazekas scored his second straight game-winning goal to lead the River Kings to a 4-1 victory over the Predateurs, Cornwall’s first win on the road this season. Corsi made 28 saves in goal for the River Kings and was named the game’s first star. Croteau, Lacasse and Eric Satim also scored for Cornwall. Keven Veilleux, in his River Kings debut, chipped in two assists. Sy Nutkevitch had three helpers for Cornwall. The game featured a classic first-period scrap between River Kings defenceman Danick Malouin and Steven Ogilvy of the Predateurs.